Cookham
in Windsor and Maidenhead of England, United Kingdom

Cookham in Windsor and Maidenhead (England) with it's 5,422 citizens is a town in United Kingdom about 25 mi (or 41 km) west of London, the country's capital city.

Current time in Cookham is now 05:29 PM (Wednesday). The local timezone is named Europe / London with an UTC offset of one hour. We know of 11 airports near Cookham, of which 5 are larger airports. The closest airport in United Kingdom is RAF Northolt in a distance of 12 mi (or 20 km), East. Besides the airports, there are other travel options available (check left side).

There are several Unesco world heritage sites nearby. The closest heritage site in United Kingdom is Blenheim Palace in a distance of 20 mi (or 32 km), North. Also, if you like playing golf, there are a few options in driving distance. We discovered 2 points of interest in the vicinity of this place. Looking for a place to stay? we compiled a list of available hotels close to the map centre further down the page.

When in this area, you might want to pay a visit to some of the following locations: Maidenhead, Bray, Bisham, White Waltham and Hurley. To further explore this place, just scroll down and browse the available info. 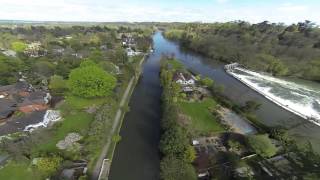 Launched the DJI F550 over the river, had a quick closeup view of the weir from angles I've never seen it from before, did a quick lap of ray mill island and then came back in to land by the river. 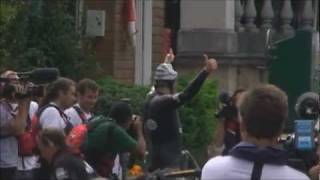 David stops for a short break at Boulters Lock during his Thames swim, Saturday 10th of September 2011. 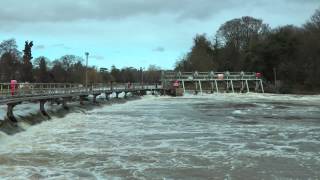 The River Thames in flood at Boulter's Lock Weir, Maidenhead on the afternoon of 9 February 2014. 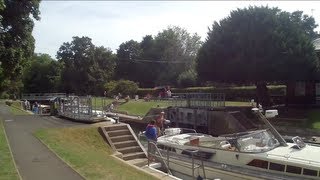 I went to investigate Cookham, which is a village on the River Thames. It's a really nice area with lots of interest about. I figured that the lock would be a nice place to sit and have some... 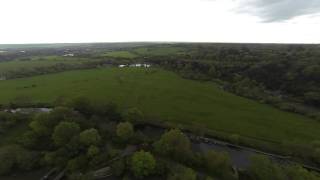 Flight over Odney and parts of Cookham. 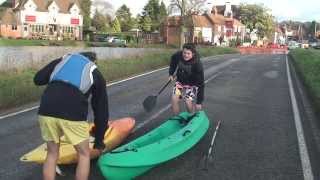 Footage of Jay Brickell and Chris Evans loading the kayaks onto the water for the first time. For the more polished, edited 'Production' video of kayaking in Cookham, see: 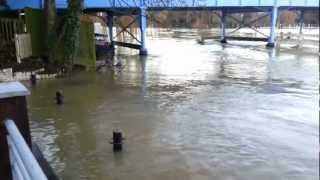 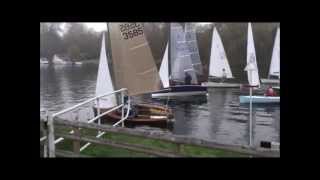 One very still November morning on the River Thames. 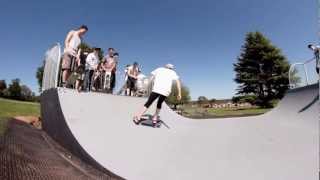 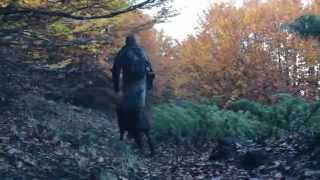 Where Would You Go? - Wayfaring Student

If you could go anywhere in the world, where would you go? What would you do? Wayfaring Student is a unique travel website with tips, guides, travelogues, stories, aimed at young travellers...

Cookham railway station serves the village of Cookham, Berkshire, England. First Great Western trains between Maidenhead and Marlow serve the station, as well as through services to and from London Paddington in peak hours Monday to Friday. The station has a ticket office, waiting room and toilets. Cookham station was opened by the Wycombe Railway in 1854. The station now has a single platform. A second platform survives but is disused. The former Station House is now let to private occupants.

Cookham Lock is a lock with weirs situated on the River Thames near Cookham, Berkshire. The lock is set in a lock cut which is one of four streams here and it is surrounded by woods. On one side is Sashes Island and on the other is Mill Island connected to Formosa Island, the largest on the non-tidal Thames. There are several weirs here. Hedsor weir was placed across the old navigation channel in 1837, seven years after the lock was opened.

The Stanley Spencer Gallery is a small gallery in Cookham, a village next to the River Thames in the English county of Berkshire.

The A4094 is a road in the United Kingdom that starts at Loudwater in Buckinghamshire and leads to Maidenhead in Berkshire.

Bourne End Railway Bridge is a railway bridge carrying the Marlow Branch Line, and a footpath over the River Thames in Bourne End, Buckinghamshire, England. It crosses the Thames on the reach between Cookham Lock and Marlow Lock. The bridge was originally constructed in wood by Isambard Kingdom Brunel as part of the Wycombe Railway, opened in 1854 and operated in broad gauge until 1870. The narrow spans were unpopular with river traffic and it was reconstructed in steel in 1895.

Cock Marsh is an area of flat water meadows and steep chalk hillsides near Cookham village and civil parish in the north-eastern corner of Berkshire in England, on the River Thames. It covers 46 acres and has been common land used for grazing since 1272. It was bought by local villagers and given to the National Trust in 1934. It has four burial mounds that are scheduled monuments. One has a height of 2m, three others around 0.2-0.8m.

Formosa Island is an island in the River Thames in England at Cookham Lock near Cookham, Berkshire, with two smaller adjacent islands. The island is one of the largest on the non-tidal river Thames with 50 acres of woodland. It can be reached by footbridge from Cookham. It is between two of the four channels in the river at Cookham, the one closest to Cookham was once the mill stream to a paper mill at Cookham. The one on the other side leads to Odney Weir.

Hedsor House is a Georgian style mansion in England, Great Britain in the southern most point of Buckinghamshire in the village of Hedsor, Taplow. Perched overlooking the River Thames, a Manor house at Hedsor can be dated back to 1166 when the estate was owned by the de Hedsor Family. In the 18th Century it was a royal residence of Princess Augusta, Dowager Princess of Wales. It is the film location of Beecham House in Dustin Hoffman's Quartet starring Maggie Smith and Michael Gambon.

Bavin's Gulls or Sloe Grove Islands are a group of islands in the River Thames in England on the reach known as Cliveden Deep above Boulter's Lock, near Maidenhead, Berkshire. This reach of the Thames was described by Jerome K. Jerome in Three Men in a Boat as "unbroken loveliness this is, perhaps, the sweetest stretch of all the river...". Bavin's Gulls consists of two large and two small thin wooded strips; they are part of the Cliveden Estate and are owned by the National Trust.

Hedsor Water is a backwater of the River Thames near Cookham, Berkshire which leaves the river above Cookham Lock and rejoins at the tail of the lock cut, running alongside Sashes Island. Hedsor Water was once the main course of the Thames but was by-passed for navigation by the construction of Cookham Lock in 1830. Navigation is only possible for the first 100 metres from the downstream end where a few temporary moorings are available.

Sashes Island is an island in the River Thames in England at Cookham Lock near Cookham, Berkshire. It is now open farmland, but has Roman and Anglo-Saxon connections. The island is located between Hedsor Water and the present navigation channel leading to Cookham Lock. It can be reached from Cookham by footbridges across three channels of the River Thames via Formosa Island and Mill Island. Its name is derived from Sceaftesege or "Sceaf’s Isle".

Cookham Abbey was an Anglo-Saxon nunnery in Berkshire, England. It was established in 726.

Located at 51.5611, -0.707551 (Lat. / Lng.), about 0 miles away.
Wikipedia Article
Monasteries in Berkshire, 726 establishments, Buildings and structures in Windsor and Maidenhead, 8th-century establishments in England, Christian monasteries established in the 8th century

These are some bigger and more relevant cities in the wider vivinity of Cookham.

This place is known by different names. Here the ones we know:
Cookham, كوهم