Tooting Graveney in Greater London (England) is a town located in United Kingdom a little south of London, the country's capital town.

Time in Tooting Graveney is now 03:03 PM (Tuesday). The local timezone is named Europe / London with an UTC offset of one hour. We know of 9 airports closer to Tooting Graveney, of which 5 are larger airports. The closest airport in United Kingdom is London Biggin Hill Airport in a distance of 10 mi (or 17 km), South-East. Besides the airports, there are other travel options available (check left side).

There are several Unesco world heritage sites nearby. The closest heritage site in United Kingdom is Tower of London in a distance of 12 mi (or 19 km), North-East. Also, if you like the game of golf, there are some options within driving distance. We saw 4 points of interest near this location. In need of a room? We compiled a list of available hotels close to the map centre further down the page.

Since you are here already, you might want to pay a visit to some of the following locations: Morden, Wandsworth, Croydon, Camberwell and City of Westminster. To further explore this place, just scroll down and browse the available info. 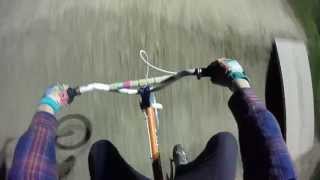 Harrriet in a random Mitcham playground - 1108

Harriet gets taken out on a winters day to a playground in Mitcham. Time for swings, falling off a roundabout, slides and a flying fox before a frolic in the leaves and time for home.

Mitcham Library is a public library in Mitcham, England, being one of the libraries of the London Borough of Merton. It was built in 1933 on land donated by a local builder, Mr Joseph Owen. In April 1932 he donated £4,025 towards its construction. The original building was 60 feet wide and 66 feet long, and was built on the London Road in Mitcham, opposite the Holborn Schools. The reference library itself was 36 feet by 25 feet, and the lending library 66 by 25 feet .

These are some bigger and more relevant cities in the wider vivinity of Tooting Graveney.