The district Sands End of in Greater London (England) is a subburb located in United Kingdom a little south-west of London, the country's capital place.

Being here already, you might want to pay a visit to some of the following locations: Wandsworth, Kensington, Hammersmith, London and City of Westminster. To further explore this place, just scroll down and browse the available info. 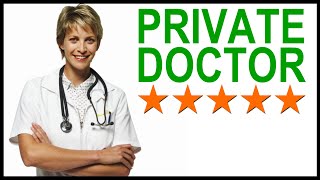 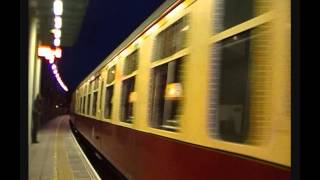 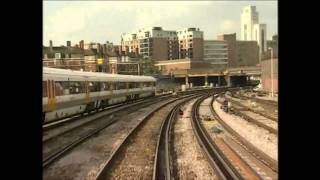 Travelling by train from Bromley South to London Victoria in just 30 seconds. Average speed is 1350mph(2170km/hr). Equivalent to Concorde. This train would even outrun a sniper rifle bullet!!!!!!... 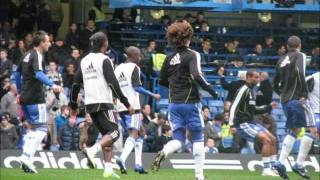 My Journey to Stamford Bridge, Home of Chelsea Football Club

I've supported Chelsea Football Club for ten years now, and it's been a decade long dream to watch them play a game in Stamford Bridge. During my winter break, I flew from Florida to New... 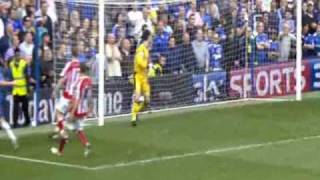 Frank Lampard's goal against Stoke City (the 5th of 7)

Frank Lampard's brilliant goal against Stoke City in the 2009/10 season at Stamford Bridge, when Stoke got 7 goals. 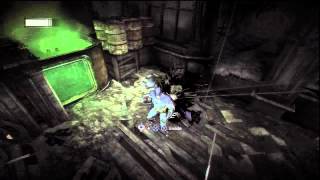 Batman has to find and Rescue Cat Woman.Its only a 15 min Demo not long enough to get into the game,but the game looks Amazing. 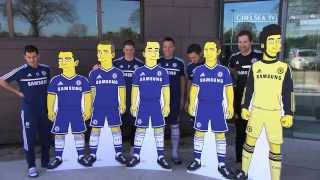 Chelsea Unseen ft. Chelsea's collaboration with The Simpsons and more

Chelsea TV have been behind the scenes at Cobham, in Istanbul and more... 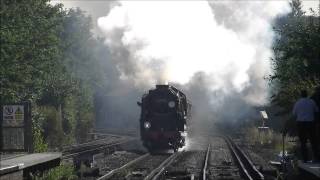 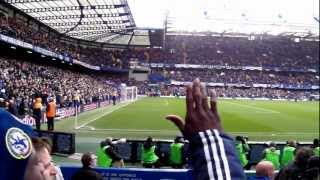 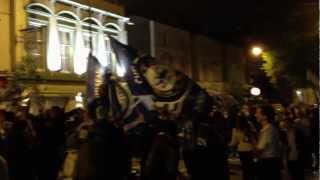 May 19, 2012. Fans celebrate on the Fulham Road after Chelsea became Champions of Europe after beating Bayern Munich on penalties at the Allianz Arena, Munich.

Located at 51.4796, -0.195 (Lat. / Lng.), about 3.557 miles away.
Wikipedia Article
Metropolitan boroughs of the County of London, History of Hammersmith and Fulham, 1900 establishments in the United Kingdom, 1965 disestablishments, Districts abolished by the London Government Act 1963

Stamford Bridge /ˈstæm. fərd ˈbrɪdʒ/ is a football stadium located in the London Borough of Hammersmith and Fulham, London. It is the home ground of Chelsea Football Club. The stadium is located within the Moore Park Estate also known as Walham Green and is often referred to as simply The Bridge. The capacity is 41,837, making it the eighth largest ground in the Premier League.

The Royal Academy of Dance (RAD) is a UK based examination board that specialises in dance education and training, including classical ballet. The RAD was founded in London, England in 1920 as the Association of Teachers of Operatic Dancing, and and was granted a Royal Charter in 1935. HM Queen Elizabeth II is patron of the RAD, with Darcey Bussell elected to serve as President in 2012, succeeding Antoinette Sibley who served as President for 21 years.

Brompton Cemetery is located near Earl's Court in South West London, England (postal districts SW 5 and 10), in the Royal Borough of Kensington and Chelsea. It is managed by The Royal Parks and is one of the Magnificent Seven. Established by Act of Parliament, it opened in 1840 and was originally known as the West of London and Westminster Cemetery. Brompton Cemetery, consecrated by the Bishop of London in June 1840, is one of the Britain's oldest and most distinguished garden cemeteries.

Located at 51.4833, -0.189167 (Lat. / Lng.), about 3.557 miles away.
Wikipedia Article
Cemeteries in London, Parks and open spaces in Kensington and Chelsea, Burials at Brompton Cemetery, Anglican cemeteries, Royal Parks of London

Britannia Row Studios is a recording studio in Fulham, London SW6, England. Pink Floyd built the original Britannia Row Studios, located in the street Britannia Row, Islington, London N1, after their 1975 album Wish You Were Here was released. They then went on to use the studio to record their next album, Animals, and parts of The Wall including the famous school chorus on "Another Brick in the Wall".

Counter's Creek ending in Chelsea Creek, the lowest part of which still exists was a stream that flowed from Kensal Green, by North Kensington and flowed south into the River Thames on the Tideway at Sands End, Chelsea, its remaining open watercourse is the quay of Chelsea Creek.

The Battersea Railway Bridge - properly called the Cremorne Bridge, after the pleasure grounds in Chelsea and originally commonly referred to as the Battersea New Bridge - is a bridge across the River Thames in London, between Battersea and Chelsea and forming part of the West London Line of the London Overground from Clapham Junction to Willesden Junction.

Cremorne Gardens were popular pleasure gardens by the side of the River Thames in Chelsea, London. They lay between Chelsea Harbour and the end of the King's Road and flourished between 1845 to 1877; today only a vestige survives, on the river at the southern end of Cheyne Walk.

Located at 51.4798, -0.17834 (Lat. / Lng.), about 3.557 miles away.
Wikipedia Article
Pleasure gardens in England, Entertainment in London, Former parks and open spaces of London, History of Kensington and Chelsea, Gardens in London

Chelsea and Fulham /ˈtʃɛlsi ənd ˈfʊləm/ is a constituency represented in the House of Commons of the UK Parliament since its 2010 creation by Greg Hands of the Conservative Party.

Located at 51.48, -0.19 (Lat. / Lng.), about 3.557 miles away.
Wikipedia Article
Politics of Kensington and Chelsea, Parliamentary constituencies in London

St Mary's Church, Battersea is the local Church of England parish church in Battersea, formerly in Surrey and now part of south London, England, in the London Borough of Wandsworth. The parish is now within the diocese of Southwark. Christians have worshipped there regularly for well over a thousand years and continue to do so to this day. It is a Grade I listed building. St Mary's stands on one of the earliest known consecrated sites on the south bank of the River Thames.

Gustav Wilhelm Wolff (14 November 1834 – 17 April 1913) was a German-British shipbuilder and politician. Born in Hamburg, he moved to Liverpool in 1849 to live with his uncle, Gustav Christian Schwabe. After serving his apprenticeship in Manchester, Wolff was employed as a draughtsman in Hyde, Greater Manchester, before being employed by the shipbuilder Edward Harland in Belfast as his personal assistant. In 1861, Wolff became a partner at Harland's firm, forming Harland and Wolff.

Our Lady of Perpetual Help Church is a Roman Catholic church in Fulham, in the London Borough of Hammersmith and Fulham. The church was designed by Benedict Williamson, an architect who later became a Catholic priest. It is situated on Stephendale Road and the parish house is situated on Tynemouth Street.

Walham Green is an area located on the border of Fulham and Chelsea, south-west London, United Kingdom. To the south is Parsons Green, south-west Fulham, north West Kensington, north-east West Brompton, east Chelsea and south-east is Sands End. Within the area is the stadium of Stamford Bridge, home of Chelsea F.C.

The 606 Club is a jazz club in Chelsea, London. The club is in a basement venue at 90 Lots Road in London SW10 and is currently licensed for 165 people. It offers jazz, Latin, soul, R&B, blues & gospel music seven nights a week, and sometimes also on Sunday afternoons, making it one of the busiest jazz clubs in Europe.

Granny Takes a Trip was a boutique opened in February 1966 at 488 Kings Road, Chelsea, London, by Nigel Waymouth, his girlfriend Sheila Cohen and John Pearse. The shop, which was acquired by Freddie Hornik in 1969, remained open until the mid-70s and has been called the "first psychedelic boutique in Groovy London of the 1960s". It was also the name of a Purple Gang song of the 1960s, which was named after the store and banned by the BBC.

The Heatherley School of Fine Art was named after Thomas Heatherley who took over as principal from James Mathews Leigh (when it was named "Leigh's"). Founded in 1845, the school is affectionately known as Heatherley's. It is one of the oldest independent art schools in London and is among the few art colleges in Britain that focus on portraiture, figurative painting and sculpture.

The Kensington Canal was a canal, about two miles long, opened in 1828 in London from the River Thames at Chelsea, along the line of Counter's Creek, to a basin near Warwick Road in Kensington. It had one lock near the Kensington Basin. It was not commercially successful, and was purchased by a railway company, which laid its line along the route of the canal.

The World's End is a district of Chelsea, London, lying at the western end of the Kings Road.

Chelsea Harbour Pier is a pier on the River Thames, in London, United Kingdom. It is located on the North Bank of the Thames, in the Sands End area of Chelsea. The pier serves the redeveloped Chelsea Harbour, a former commercial wharf which has been converted to luxury residential use.

The Sacred Heart Church is a Roman Catholic church and parish in Trott Street, Battersea, South West London, that serves the Catholic community of Battersea and surrounding areas. The church was designed by Frederick Walters in a late Norman style. It is built in red brick, with stone sills and some stone dressings entrance. The West Tower has an octagonal broached steeple. Inside, the ceiling is vaulted. The spire is copper clad. The church was founded by priests of the Salesians.

Rafayel on the Left Bank is a luxury eco hotel located at Falcon Wharf, Battersea in the London Borough of Wandsworth. The Falcon Wharf complex was originally developed by George Wimpey Ltd and was designed by architect James Burland of Burland TM. The 17 storey building is composed of four blue-clad curved towers and is situated by the River Thames, close to the London Heliport; it is one of the tallest riverside residential buildings in Battersea.

Wyndham Grand London Chelsea Harbour is the only luxury 5-star all-suite hotel in London, England. Located near the boutiques of Kings Road, the hotel has 158 suites, including 4 penthouse suites with panoramic vistas. The Wyndham Grand London has 11 conference rooms to accommodate for up to 1000 delegates. These spaces are also licensed for civil ceremonies. Its Chelsea Riverside Brasserie, Bar and Terrace serves meals made from fresh, local produce.

South Park is a 7.9 hectare park in the London Borough of Hammersmith and Fulham. South Park contains a public cricket pitch, tennis courts, football pitches, netball and basketball courts. In addition there is a large children's playground fenced off from the main park and a 1 km perimeter walk used by runners, walkers, dogs and their owners. Many people enjoy South Park for its unique trees and well maintained gardens. A nursery for 2-5 year olds operates out of the cricket pavilion.