Stralsund in Mecklenburg-Vorpommern with it's 58,976 habitants is a city located in Germany about 124 mi (or 200 km) north of Berlin, the country's capital town.

Current time in Stralsund is now 08:56 AM (Wednesday). The local timezone is named Europe / Berlin with an UTC offset of one hour. We know of 10 airports closer to Stralsund, of which 4 are larger airports. The closest airport in Germany is Barth Airport in a distance of 16 mi (or 25 km), West. Besides the airports, there are other travel options available (check left side).

There are several Unesco world heritage sites nearby. The closest heritage site in Germany is Historic Centres of Stralsund and Wismar in a distance of 0 mi (or 1 km), South. We saw 2 points of interest near this location. In need of a room? We compiled a list of available hotels close to the map centre further down the page.

Since you are here already, you might want to pay a visit to some of the following locations: Greifswald, Zingst, Neubrandenburg, Rostock and Guestrow. To further explore this place, just scroll down and browse the available info. 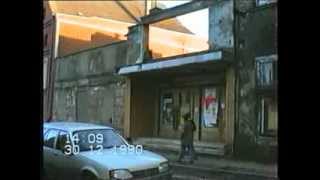 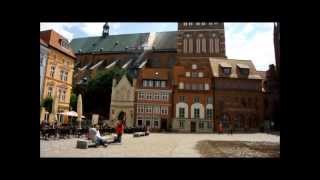 Ein Rundgang durch die historische Altstadt mit Besuch der Aussichtsplattform der Marienkirche. A stroll through the historic old town with a visit to the viewing platform of the St. Mary's... 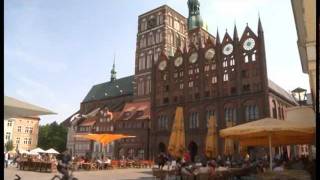 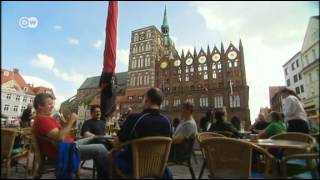 Stralsund was awarded World Heritage status together with Wismar in 2002. They are unique examples of how Hanseatic towns looked at the height of the League in the 14th century. 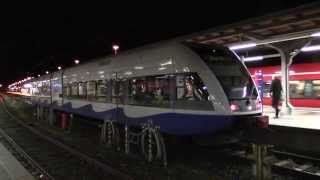 A few moments at Stralsund Hbf

A few moments at Stralsund Hbf while changing trains. 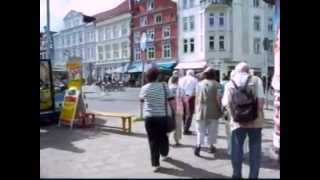 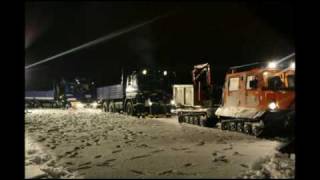 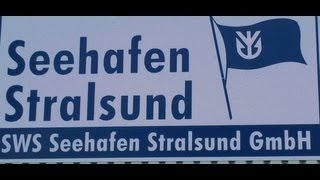 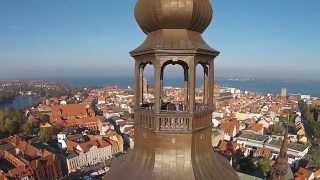 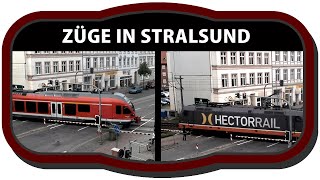 The Gorch Fock I (ex Tovarishch, ex Gorch Fock) is a German three-mast barque, the first of a series built as school ships for the German Reichsmarine in 1933. She was taken as war reparations by the Soviet Union after World War II and renamed Tovarishch.

The Strelasund Crossing refers to the two bridge links to the German island of Rügen over the Strelasund to the West Pomeranian mainland near Stralsund, the Rügen Bridge and the Rügen Causeway (Rügendamm), as well as the regular ferry services between Stralsund and Altefähr and between Stahlbrode and Glewitz. The Rügen Causeway was the first fixed crossing over the sound of Strelasund, for both the old Bundesstraße 96, the Stralsund–Sassnitz railway and a combined footpath and cycle path.

Volkswerft (German: Volkswerft Stralsund GmbH) is a shipyard in the hanseatic city of Stralsund on the Strelasund. It is part of the German Hegemann-group. The Volkswerft was founded in 1945 as Ingenieurbau Ges.m.b.H.. On April 25 the first trawler was delivered and on June 15 1948 the VEB Volkswerft Stralsund was registered. From 1948 till 1953 the shipyard produced 196 ships, all of them to be used for reparation payments to the Soviet Union.

The Siege of Stralsund was a siege laid on Stralsund by Albrecht von Wallenstein's Imperial Army during the Thirty Years' War, from May to 4 August 1628. Stralsund was aided by Denmark and Sweden, with considerable Scottish participation. The siege ended Wallenstein's series of victories, and contributed to his downfall. The Swedish garrison in Stralsund was the first on German soil in history. The battle marked the de facto entrance of Sweden into the war.

The German Maritime Museum, also called the Museum for Museum für Oceanography and Fishery, Aquarium, in the Hanseatic town of Stralsund is a museum, in which maritime and oceanographic exhibitions are displayed. It is the most visited museum in North Germany. In addition to the main museum building, the actual maritime museum, there are three other sites, the Ozeaneum, opened in July 2008, the Nautineum and the Natureum. The main house is located in the hall of the former St.

Ozeaneum is a public aquarium in the German city of Stralsund. It belongs to the German Oceanographic Museum (Deutsches Meeresmuseum), arguably one of the three largest institutions of its kind in Europe. The Ozeaneum — located in the historical center on the Baltic coast — opened its doors in July 2008. It displays primarily sea life of the North Sea and the Baltic Sea. The Ozeaneum was expected to be a major tourist attraction, and receive 550,000 visitors per year.

Stralsund Central Station (Stralsund Hauptbahnhof) is the main station in Western Pomerania and the central station for railway lines running to Hamburg, Bergen auf Rügen and Berlin in the German Hanseatic city of Stralsund. It is owned and operated by Deutsche Bahn.

The Stralsund Theatre in the German town of Stralsund has a long tradition. Performances of theatre pieces on the Alter Markt are documented in the years 1553 ("Tragedie van deme Daniel") and 1584 ("De Tragedien van Susannen"). The tradition has continued since the merger of the theatres of the towns of Stralsund and Greifswald in 1994 into the Theatre of West Pomerania (Theater Vorpommern).

These districts belong to Stralsund.

These are some bigger and more relevant cities in the wider vivinity of Stralsund.