Koblenz in Rhineland-Palatinate with it's 107,319 habitants is located in Germany about 292 mi (or 471 km) south-west of Berlin, the country's capital town.

Current time in Koblenz is now 08:48 PM (Thursday). The local timezone is named Europe / Berlin with an UTC offset of one hour. We know of 10 airports close to Koblenz, of which 4 are larger airports. The closest airport in Germany is Frankfurt-Hahn Airport in a distance of 31 mi (or 50 km), South-West. Besides the airports, there are other travel options available (check left side).

There are several Unesco world heritage sites nearby. The closest heritage site in Germany is Upper Middle Rhine Valley in a distance of 13 mi (or 22 km), South-East. If you need a hotel, we compiled a list of available hotels close to the map centre further down the page.

While being here, you might want to pay a visit to some of the following locations: Sankt Sebastian, Niederwerth, Urbar, Weitersburg and Kaltenengers. To further explore this place, just scroll down and browse the available info. 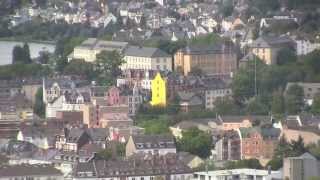 Koblenz also spelled Coblenz (sometimes English and pre-1926 German spelling) or Coblence (French), is a German city situated on both banks of the Rhine at its confluence with the Moselle,... 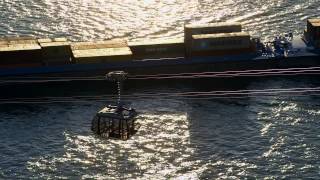 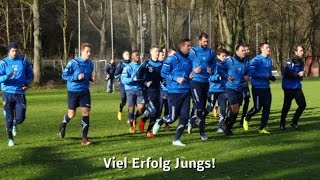 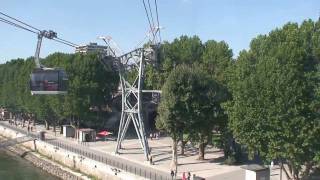 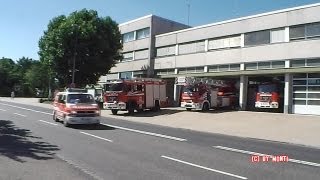 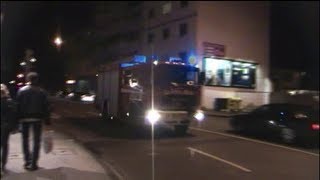 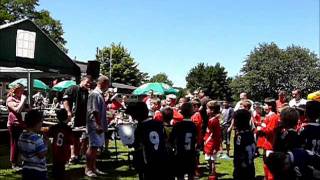 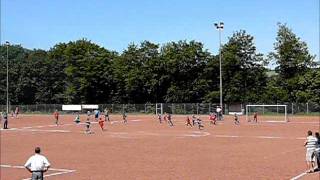 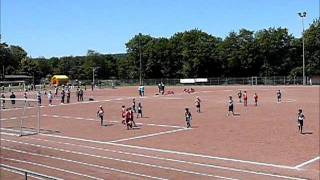 Rhin-et-Moselle is the name of a département of the First French Empire in present Germany. It is named after the rivers Rhine and Moselle. It was formed in 1798, when the left bank of the Rhine was annexed by France. Until the French occupation, its territory was divided between the Archbishopric of Cologne, the Archbishopric of Trier, and the Electorate of the Palatinate. Its territory is part of the present German states of Rhineland-Palatinate and North Rhine-Westphalia.

|} The West Rhine railway is a famously picturesque, double-track electrified railway line running for 185 km from Cologne via Bonn, Koblenz, and Bingen to Mainz. It is situated close to the western (left) bank of the river Rhine and mostly aligned to allow 160 km/h operation between Cologne and Koblenz and between Bingen and Mainz. Line speed between Koblenz and Bingen is restricted by the meandering nature of the Rhine.

Koblenz Central Station (Koblenz Hauptbahnhof) is a railway station for the city of Koblenz in the German state of Rhineland-Palatinate. It is the focal point of rail transport in the Rhine-Moselle-Lahn area. It is a through station in southern Koblenz built below Fort Großfürst Konstantin and opened in 1902 in the Neustadt (new city), which was built after the demolition of the city walls in 1890.

The German Federal Archives or Bundesarchiv (BArch) are the National Archives of Germany. They were established at the current location in Koblenz in 1952. They are subordinated to the State Minister of Culture (as of 2011, Bernd Neumann), and before 1998, to the Federal Ministry of the Interior. The institution's 2009 budget amounted to 54.6 million Euro. On December 6, 2008 the Archives donated 100,000 photos to the public, by making them accessible via Wikimedia Commons.

|} The Koblenz–Neuwied railway is a two-track, electrified main line railway in the German state of Rhineland-Palatinate. It connects the Neuwied station on the Right (east) Rhine line to the major railway junction at Koblenz Hauptbahnhof (central station) and to the Left (west) Rhine and Moselle lines.

Koblenz Stadmitte station (German: Haltepunkt Koblenz Stadtmitte, freely translated as "Koblenz City Centre station") was opened on 14 April 2011 on the West Rhine Railway in central Koblenz in the German state of Rhineland Palatinate. The main purpose of this station is to improve public transport access to central Koblenz because it is more convenient than Koblenz Hauptbahnhof (main station).

III Corps was a corps of the German Army (Bundeswehr Heer) active from 1957 to 1994. The preparation of the staff of the corps took place from 16 March 1957 at Gneisenau-Kaserne, Koblenz; the corps was officially formed on 6 April 1957. Initially, the 2nd Panzergrenadier Division and 5th Panzer Division moved in 1957 from the II Corps to III Corps. The corps was integrated into defence planning from mid-1957, as part of NATO's Central Army Group, commanded by the commander of the U.S.

Koblenz-Lützel station is the oldest still-operating station in the city of Koblenz in the German state of Rhineland-Palatinate. It was built at the same time as the Koblenz Rhenish station, which was abandoned in 1902 with the opening of the Koblenz Central Station (Hautptbahnhof) and destroyed in World War II. The station is located in the Koblenz suburb of Lützel, near the Moselle river and the Moselle railway bridge. It includes a passenger station and a freight yard.

These districts belong to Koblenz.

These are districts that are close by, but belong to a different city than Koblenz.

These are some bigger and more relevant cities in the wider vivinity of Koblenz.