Gdańsk in Gdańsk (Województwo Pomorskie) with it's 461,865 citizens is a place in Poland about 176 mi (or 284 km) north-west of Warsaw, the country's capital city.

Current time in Gdańsk is now 08:31 AM (Wednesday). The local timezone is named Europe / Warsaw with an UTC offset of 2 hours. We know of 8 airports near Gdańsk, of which two are larger airports. The closest airport in Poland is Gdańsk Lech Wałęsa Airport in a distance of 7 mi (or 12 km), West. Besides the airports, there are other travel options available (check left side).

There are two Unesco world heritage sites nearby. The closest heritage site in Poland is Castle of the Teutonic Order in Malbork in a distance of 27 mi (or 43 km), South-East. If you need a hotel, we compiled a list of available hotels close to the map centre further down the page.

While being here, you might want to pay a visit to some of the following locations: Pruszcz Gdanski, Suchy Dab, Kosakowo, Tczew and Hel. To further explore this place, just scroll down and browse the available info. 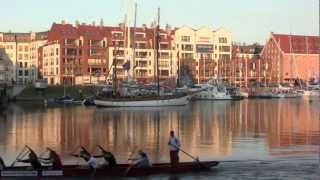 Footage taken in and around the Northern Polish City of Gdańsk on the Baltic Coast, in Pomerania in Poland. Gdańsk is Poland's principal seaport as well as the capital of the Pomeranian Voivodesh... 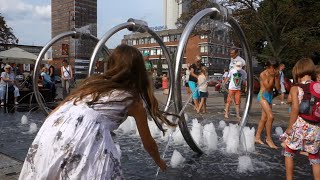 While working on the self-guided town walk of Gdańsk in our Rick Steves' Eastern Europe guidebook, I came upon an historic mill (whose millstones rumbled 24/7 to produced 20 tons of flour... 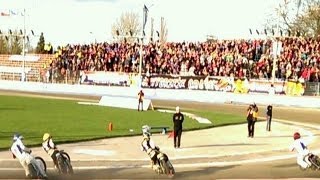 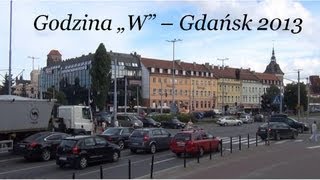 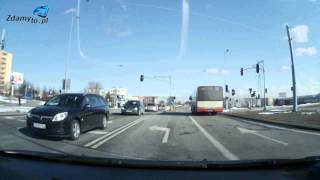 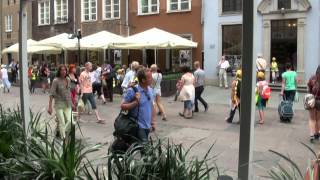 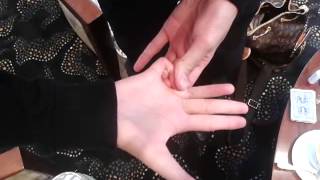 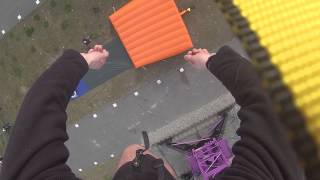 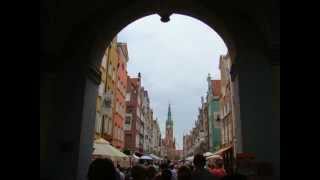 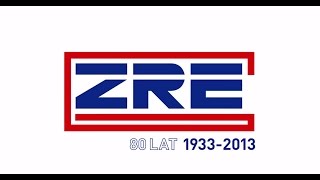 The naval Battle of Oliwa, also Battle of Oliva or Battle of Gdańsk Roadstead, took place on 28 November 1627 during the Polish-Swedish War slightly north of the port of Danzig (Gdańsk) near the village of Oliva. It was the largest naval battle fought by the Polish royal navy, and resulted in the defeat of a small Swedish squadron.

St. Mary's Church or, properly, Basilica of the Assumption of the Blessed Virgin Mary is a Roman Catholic church in Gdańsk (Danzig), Poland, which is the largest brick church in the world. It was begun in 1379. St. Mary's is one of the largest European Brick Gothic buildings, which include castles. Between 1536 and 1572 St.  Mary's Church was used for Roman Catholic and Lutheran services alike. Since then until 1945 it was the biggest Lutheran church in the world.

Gdańsk Główny is a railway station in Gdańsk, Poland. The station is the main passenger station for the city of Gdańsk, as it is localised in the centre of the city. Access is easy due to a large number of communication routes intersecting near the station building.

Golden Gate in Gdańsk (Danzig), Poland, German Langgasser Tor, is one of the most notable tourist attractions of the city. It was raised in 1612–14 in place of the 13th century gothic gate (Brama Długouliczna). It is located at one end of Long Lane, where, together with Brama Wyżynna and Wieża Więzienna, it forms a part of the old city fortifications. It was designed by architect Abraham van den Blocke and was constructed by Jan Strakowski.

The Monument Cemetery of the Lost Cemeteries

The monument commemorates the necropolis which no longer exists in the city of Gdańsk, Poland. It is dedicated to the citizens of Gdańsk who were once buried in one of the city’s 27 graveyards either destroyed during WWII or bulldozed on purpose after the end of the war. The monument was designed to resemble a temple.

The Great Synagogue, was a synagogue of the Jewish Community of Danzig in the city of Danzig, Germany. It was built in 1885-1887 on Reitbahnstraße, now Bogusławski Street. It was the largest synagogue in the city, and was demolished by the Free City authorities in May 1939.

The Long Market in Gdańsk, Poland, is one of the most notable tourist attractions of the city. It is situated between the end of Long Lane (Ulica Długa, Langgasse) and Green Gate (Brama Zielona, Koggentor).

Located at 54.3497, 18.6482 (Lat. / Lng.), about 0 miles away.
Wikipedia Article
Buildings and structures in Gdańsk, Squares in Poland, Visitor attractions in Gdańsk

The Long Lane in Gdańsk, Poland, is one of the most notable tourist attractions of the city. It leads from Golden Gate (Gdańsk) (Złota Brama, Langgasser Tor) to Long Market (Długi Targ, Langer Markt) and Green Gate (Brama Zielona, Koggentor).

The Artus Court, formerly also Junkerhof, is a building in the centre of Gdańsk, Poland, at Długi Targ 44, which used to be the meeting place of merchants and a centre of social life. Today it is a point of interest of numerous visitors and a branch of the Gdańsk History Museum.

The National Museum in Gdańsk (Polish: Muzeum Narodowe w Gdańsku), established in 1972 (although the history goes back the third quarter of 19th century), is one of the main branches of Poland's National Museum system. Its main location is in the old Franciscan monastery, which has been used to house exhibits since the end of the 19th century.

St Catherine's Church is the oldest church in Gdańsk, Poland. It was a Protestant church from 1545 until 1945, after which it became a Roman Catholic church.

Located at 54.3542, 18.6514 (Lat. / Lng.), about 0 miles away.
Wikipedia Article
Churches in Poland, Buildings and structures in Gdańsk, Visitor attractions in Gdańsk, Churches in Pomeranian Voivodeship

These districts belong to Gdańsk.

These are some bigger and more relevant cities in the wider vivinity of Gdańsk.