Salamanca
in Salamanca of Castille and León, Spain

Salamanca in Salamanca (Castille and León) with it's 155,619 habitants is a town located in Spain about 110 mi (or 176 km) west of Madrid, the country's capital town.

Time in Salamanca is now 03:08 PM (Tuesday). The local timezone is named Europe / Madrid with an UTC offset of one hour. We know of 9 airports closer to Salamanca, of which one is a larger airport. The closest airport in Spain is Salamanca Airport in a distance of 9 mi (or 14 km), East. Besides the airports, there are other travel options available (check left side).

There are several Unesco world heritage sites nearby. The closest heritage site is Prehistoric Rock Art Sites in the Côa Valley and Siega Verde in Portugal at a distance of 25 mi (or 41 km). The closest in Spain is Old City of Salamanca in a distance of 69 mi (or 41 km), South-East. In need of a room? We compiled a list of available hotels close to the map centre further down the page.

Since you are here already, you might want to pay a visit to some of the following locations: Carbajosa de la Sagrada, Santa Marta de Tormes, Villares de la Reina, Villamayor and Aldeatejada. To further explore this place, just scroll down and browse the available info. 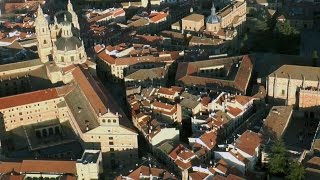 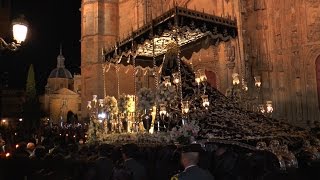 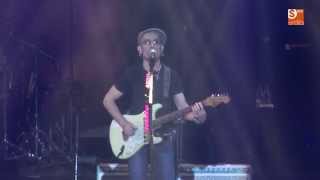 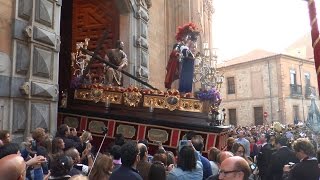 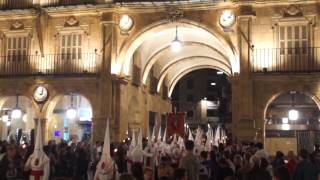 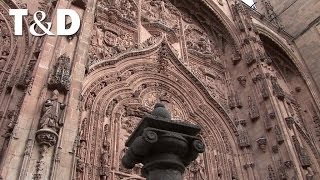 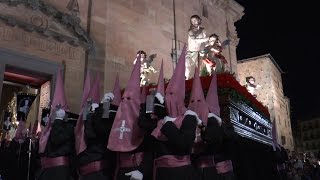 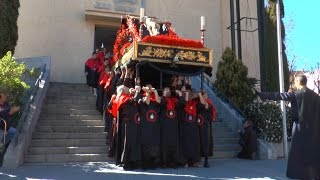 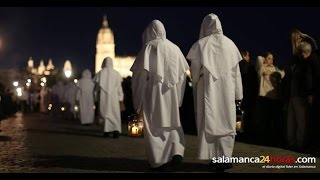 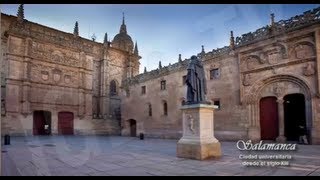 The University of Salamanca (Spanish: Universidad de Salamanca) is a Spanish higher education institution, located in the town of Salamanca, west of Madrid, in the autonomous community of Castilla and León. It was founded in 1134 and given the Royal charter of foundation by King Alfonso IX in 1218. It is the oldest founded university in Spain and the third oldest European university in continuous operations.

The Pontifical University of Salamanca is a private, catholic university, located in Salamanca, Spain, and campus in Salamanca and Madrid.

The New Cathedral is, together with the Old Cathedral, one of the two cathedrals of Salamanca, Spain. It was constructed between the 16th in and 18th centuries in two styles: late Gothic and Baroque. Building began in 1513 and the cathedral was consecrated in 1733. It was commissioned by Ferdinand V of Castile of Spain. It was declared a national monument by royal decree in 1887.

Located at 40.9606, -5.66583 (Lat. / Lng.), about 1 miles away.
Wikipedia Article
Cathedrals in Spain, Buildings and structures in Salamanca, Churches in Castile and León

Plaza de Toros de "La Glorieta" is a bullring in Salamanca, Castile and León, Spain. It is currently used for bull fighting. The stadium holds 10,858 people. It was built in 1892 and officially opened on September 11, 1893. It's classical in style, and has three levels, made of stone, wrought-iron and brick. The ring is 54 metres in diameter, and there is seating for almost 11000 spectators.

The Colegio Mayor de Santiago, el Zebedeo, Colegio del Arzobispo or Colegio Mayor de Fonseca is a historical edifice in Salamanca, Spain, founded in 1519 by Alonso de Fonseca, archbishop of Santiago de Compostela (hence its name), in order to provide Galician students with a college in which to study within the University of Salamanca. It is one of the Colegios Mayores of Salamanca and was later known as the Colegio de los Irlandeses or the Irish College.

Salamanca is a city in northwestern Spain, the capital of the Province of Salamanca in the community of Castile and León. Its Old City was declared a UNESCO World Heritage Site in 1988. With a metropolitan population around 192,000 it is the second most populated urban area in Castile and León, after Valladolid (369,000), and closely followed by Leon (187,000) and Burgos (176,000).

The Old Cathedral is one of two cathedrals in Salamanca, Spain, the other being the New Cathedral of Salamanca. It was founded by Bishop Jerome of Périgord, in the 12th century and completed in Romanesque/Gothic style in the 14th century. It is dedicated to Santa Maria de la Sede (Saint Mary of the See). The apse houses a large cycle of 53 tables, 12 of which by the 15th century Italian artist Dello Delli, depicting the life of Jesus and the Virgin Mary.

Located at 40.9605, -5.66667 (Lat. / Lng.), about 1 miles away.
Wikipedia Article
Cathedrals in Spain, Buildings and structures in Salamanca, Churches in Castile and León

The Convento de San Esteban is a Dominican monastery situated in the Plaza del Concilio de Trento in the city of Salamanca.

Located at 40.9606, -5.66306 (Lat. / Lng.), about 1 miles away.
Wikipedia Article
16th-century architecture, 1618 establishments, Buildings and structures in Salamanca, Monasteries in Castile and León, Renaissance architecture in Spain

The Casa de las Conchas is a historical building in Salamanca, central Spain. It currently houses a public library. It was built from 1493 to 1517 by Rodrigo Arias de Maldonado, a knight of the Order of Santiago de Compostela and a professor in the University of Salamanca. Its most peculiar feature is the façade, mixing late Gothic and Plateresque style, decorated with more than 300 shells, symbol of the order of Santiago, as well as of the pilgrims performing the Way of St. James.

The Plaza Mayor in Salamanca, Spain is a large plaza located in the center of Salamanca, used as a public square. It was built in the traditional Spanish baroque style and is a popular gathering area. It is lined by restaurants, ice cream parlors, tourist shops, jewelry stores and a pharmacy along its perimeter except in front of the city hall. It is considered the heart of Salamanca and is widely regarded as one of the most beautiful plazas in Spain.

The Convento de las Dueñas is a dominican convent located in the city of Salamanca. It was built in the 15th and 16th centuries.

Located at 40.9611, -5.66355 (Lat. / Lng.), about 1 miles away.
Wikipedia Article
Buildings and structures in Salamanca, Renaissance architecture in Spain

These are some bigger and more relevant cities in the wider vivinity of Salamanca.