Current time in Bilbao is now 01:20 PM (Thursday). The local timezone is named Europe / Madrid with an UTC offset of 2 hours. We know of 9 airports close to Bilbao, of which one is a larger airport. The closest airport in Spain is Bilbao Airport in a distance of 3 mi (or 4 km), North. Besides the airports, there are other travel options available (check left side).

There are several Unesco world heritage sites nearby. The closest heritage site in Spain is Vizcaya Bridge in a distance of 5 mi (or 8 km), North-West. If you need a hotel, we compiled a list of available hotels close to the map centre further down the page.

While being here, you might want to pay a visit to some of the following locations: Sondika, Basauri, Derio, Erandio and Alonsotegi. To further explore this place, just scroll down and browse the available info. 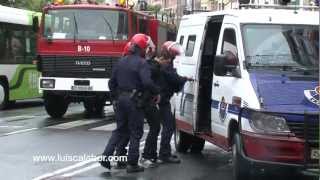 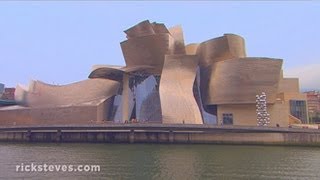 More info about travel to Spanish Basque Country: http://www.ricksteves.com/europe/spain/basque-country Bilbao has recently been transformed from a gritty steel town to a happening cultural... 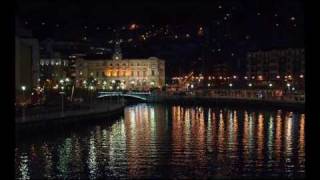 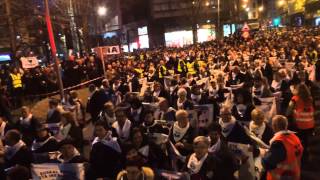 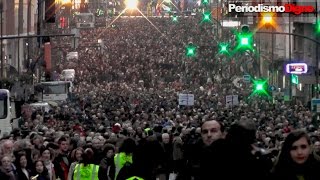 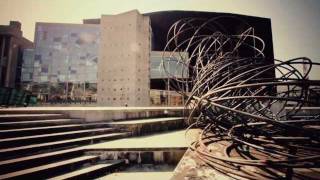 Bilbao, culture as an economic engine 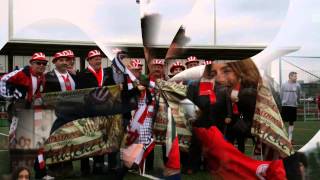 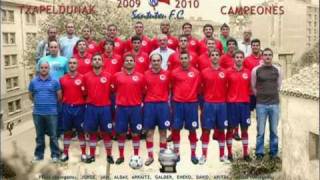 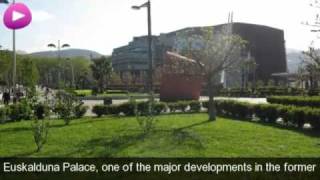 Create your own video on http://studio.stupeflix.com/?w=1 ! Location of the urban districts and some major neighbourhoods. Blizzard in Bilbao, Jan 1985. Strong blizzards covered Bilbao in snow... 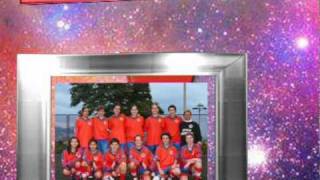 The Zubizuri (Basque for "white bridge"), also called the Campo Volantin Bridge or Puente del Campo Volantin, is a tied arch footbridge across the Nervion River in Bilbao, Spain. Designed by architect Santiago Calatrava, the bridge links the Campo Volantin right bank and Uribitarte left bank of the river.

The Teatro Arriaga is an opera house in Bilbao, Spain. It was built in Neo-baroque style by architect Joaquín Rucoba in 1890, the same architect that built the city hall. It is named after Juan Crisóstomo de Arriaga, known in his time as the "Spanish Mozart". The theater was rebuilt in 1985 after severe flooding destroyed it in August 1983.

Located at 43.2594, -2.925 (Lat. / Lng.), about 0 miles away.
Wikipedia Article
Buildings and structures in Bilbao, Opera houses in Spain, Music venues completed in 1890, Visitor attractions in Bilbao

Abando was the name of an old municipality of Biscay, that was eventually absorbed by Bilbao. Nowadays, the name refers to the central district and neighbourhood of this city, holding the provincial administration, the long-distance RENFE Bilbao-Abando train station, three subway stations (Abando, Moyúa and Indautxu), and many commerces like El Corte Inglés department store.

The Basilica of Begoña (or Basílica de Nuestra Señora de Begoña in Spanish) is a basilica in Bilbao, in Spain, dedicated to the patron saint of Biscay, the Virgin Begoña. The current parish priest is Jesús Francisco de Garitaonandia.

Located at 43.2608, -2.92972 (Lat. / Lng.), about 0 miles away.
Wikipedia Article
Basilica churches in Spain, Buildings and structures in Bilbao, Marian shrines, Churches in the Basque Country, Visitor attractions in Bilbao

The Plaza Nueva or Plaza Barria (New Square) of Bilbao is a monumental square of Neoclassical style built in 1821. Its name comes from the previously existing Plaza Vieja or Old Square in the place where the Ribera Market was built. The square is enclosed by arcaded buildings and accessed by arches known as cuevas (caves). The main building was the site of the Biscay government, until a new palace was built in 1890. The place is now the site of Euskaltzaindia, the Basque language Royal Academy.

Santiago Cathedral is a Catholic Cathedral in the city of Bilbao that was officially declared cathedral in 1950. Its origins probably date to well before the foundation of the city in 1300, when Bilbao was little more than a small enclave of fishermen. The temple is consecrated in honor of the apostle Saint James the Great, by virtue of being a point of transit for the pilgrims that followed the Northern branch of the Way of Saint James.

Located at 43.2569, -2.92389 (Lat. / Lng.), about 0 miles away.
Wikipedia Article
Buildings and structures in Bilbao, Cathedrals in Spain, Basilica churches in Spain, Churches in the Basque Country, Visitor attractions in Bilbao

The City Hall of Bilbao, Spain, is located on the right bank of the Estuary of Bilbao across the Puente del Ayuntamiento bascule bridge that links it to the central Abando district. The building was built in 1892 by Joaquín Rucoba, on the former site of a convent in the district of Uribarri. It was built in Baroque style. One of the highlights of the building is the Arab Hall, a richly decorated hall in the Neo-Mudéjar style that resembles the decorations found in the Alhambra of Granada.

Las Siete Calles or Casco Viejo in Spanish or Zazpikaleak or Alde Zaharra in Basque are different names for the medieval neighbourhood of Bilbao, part of the Ibaiondo district. The names mean Seven Streets or Old Town respectively and it used to be the walled part of the town until the end of the 19th century.

Estación de Abando Indalecio Prieto, also known as Bilbao-Abando and locally named as Estación del Norte ("North Station") is a railway terminal station located on Abando, the sixth district of Bilbao. It is the main and most important train station of Bilbao. It is located in the center of the city, in the neighborhood of Abando (on the district of the same name), near the Circular Square (formerly known as Spain Square) and the Gran Vía de Don Diego López de Haro.

Ibaiondo is the 5th district of the city of Bilbao. Ibaiondo is a recently used name and in Basque language means Beside the river. It is divided into the neighbourhoods of Atxuri, Bilbo Zarra, Casco Viejo, Iturralde, Abusu, San Adrián, San Francisco, Solokoetxe, Miribilla and Zabala. The original walled city, the Casco Viejo, is located in this district, including the oldest buildings of the city like the Santiago Cathedral and Saint Anton Church, both from the 15th century.

Uribarri is the second district of the city of Bilbao, Basque Country. It is divided into the neighbourhoods of Castaños, Matico-Ciudad Jardín, Uríbarri proper and Zurbaran-Arabella. It has an area of 4.19 square kilometers and a population of 39,369 inhabitants.

The Arenal Bridge is a reinforced concrete bridge in Bilbao, Spain. It spans the Estuary of Bilbao, linking the neighborhoods of Casco Viejo and Abando. The original bridge was opened in 1847. The Arriaga Theater, the Arenal de Bilbao (Bilbao Arenal) park, the Estación de Concordia (Concordia Train Station) and the Bailén Skyscraper (the first skyscraper of the city) can be seen from the bridge.

These districts belong to Bilbao.

These are some bigger and more relevant cities in the wider vivinity of Bilbao.