Messina
in Province of Messina of Sicily, Italy

Messina in Province of Messina (Sicily) with it's 219,948 inhabitants is located in Italy about 302 mi (or 486 km) south-east of Rome, the country's capital.

Local time in Messina is now 04:10 AM (Friday). The local timezone is named Europe / Rome with an UTC offset of 2 hours. We know of 9 airports in the wider vicinity of Messina, of which 3 are larger airports. The closest airport in Italy is Reggio Calabria Airport in a distance of 10 mi (or 16 km), South-East. Besides the airports, there are other travel options available (check left side).

There are several Unesco world heritage sites nearby. The closest heritage site in Italy is Isole Eolie (Aeolian Islands) in a distance of 39 mi (or 62 km), North-West. We found 6 points of interest in the vicinity of this place. If you need a place to sleep, we compiled a list of available hotels close to the map centre further down the page.

Depending on your travel schedule, you might want to pay a visit to some of the following locations: Villa San Giovanni, Campo Calabro, Saponara, Villafranca Tirrena and Reggio Calabria. To further explore this place, just scroll down and browse the available info. 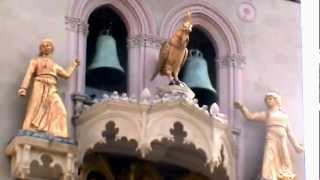 Messina is a province in the autonomous island region of Sicily in Italy. Its capital is the city of Messina.

Stadio Comunale San Filippo is a football stadium in Messina, Italy. It is currently the home of A.C.R. Messina.

Located at 38.1614, 15.5208 (Lat. / Lng.), about 3 miles away.
Wikipedia Article
Football venues in Italy, Buildings and structures in Messina, Sports venues in Sicily

Located at 38.165, 15.54 (Lat. / Lng.), about 2 miles away.
Wikipedia Article
Football venues in Italy, Buildings and structures in Messina, Sports venues in Sicily

Messina Airfield is an abandoned World War II military airfield in Italy, which was located just to the west of Messina in Sicily. It was a temporary field built by the Army Corps of Engineers used as part of the Allied invasion of Italy. The airfield was primarily used by the United States Army Air Force Twelfth Air Force 57th Fighter Group during 15–16 September 1943, flying combat operations with P-40 Warhawks.

Messina Centrale is the main railway station of the Italian city of Messina, in Sicily. As Palermo Centrale, Catania Centrale and Syracuse it is one of the most important stations of its region. It is owned by the Ferrovie dello Stato, the national rail company of Italy.

For other buildings of this name, see Palazzo del Monte di Pietà. The palazzo del Monte di pietà was a building on via XXIV Maggio (once "via dei Monasteri") in Messina. Designed by Natale Masuccio in 1616 for the Arciconfraternita degli Azzurri, it was severely damaged by the 1908 earthquake and only its facade now remains. \t\t \t\t\tMessina Palace Monte di pietà453 . jpg \t\t\t \t\t\t \t\t \t\t \t\t\tMessina Palazzo Monte di Pietà (Natale Masuccio)3. jpg

The "Sanctuary of Our Lady of Mount Carmel", better known as Carmine Church, is a church of Messina, in Sicily. Replaces the church itself, located near the Cathedral and destroyed in the 1908 Messina earthquake. It is located before the Courthouse, and recalls the typical style of the eighteenth century before the destruction of the Messina earthquake.

Messina Marittima railway station (Italian: Stazione di Messina Marittima) is an interchange station for train and ferry services into and out of the city and comune of Messina, on the island of Sicily, Italy. Opened in 1889 and rebuilt between 1937 and 1939, it forms part of the Palermo–Messina and Messina–Sicacusa railways. The station is currently managed by Rete Ferroviaria Italiana (RFI). However, the commercial area of the passenger building is managed by Centostazioni.

These are some bigger and more relevant cities in the wider vivinity of Messina.