Benidorm
in Alicante of Valencia, Spain

Benidorm in Alicante (Valencia) with it's 71,034 habitants is a town located in Spain about 230 mi (or 371 km) south-east of Madrid, the country's capital town.

Time in Benidorm is now 07:38 AM (Monday). The local timezone is named Europe / Madrid with an UTC offset of 2 hours. We know of 8 airports closer to Benidorm, of which one is a larger airport. The closest airport in Spain is Alicante International Airport in a distance of 29 mi (or 47 km), South-West. Besides the airports, there are other travel options available (check left side).

There are several Unesco world heritage sites nearby. The closest heritage site in Spain is Palmeral of Elche in a distance of 50 mi (or 80 km), East. We saw 7 points of interest near this location. In need of a room? We compiled a list of available hotels close to the map centre further down the page.

Since you are here already, you might want to pay a visit to some of the following locations: l'Alfas del Pi, Finestrat, Altea, Villajoyosa and Callosa d'En Sarria. To further explore this place, just scroll down and browse the available info. 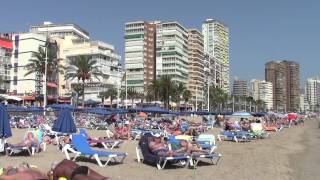 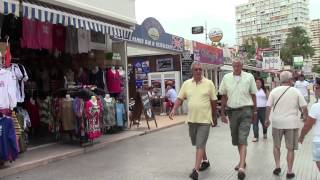 An impression of the east side of Benidorm. 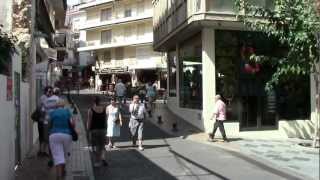 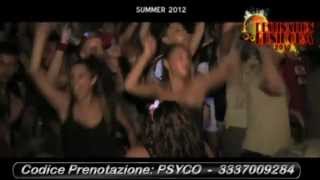 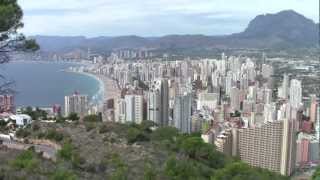 Benidorm Walk to the Cross

A walk from Benidorm to the cross in the Sierra Helada. 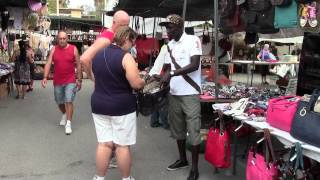 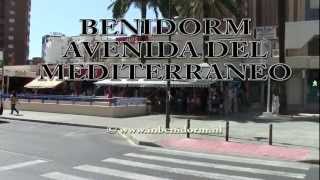 The main street of Benidorm Levante area, leading from Rincon de Loix to the old town. 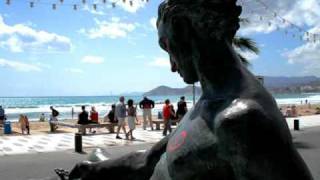 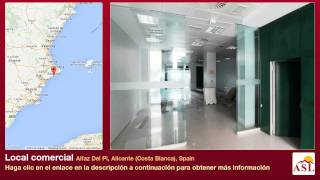 Terra Mítica is a theme park located in Benidorm, Spain. The park is divided into 5 themed zones: Egypt, Greece, Rome, Iberia, and the Islands (of the Mediterranean). The park opened in 2000. In 2004-2006 the park went through a bankruptcy process. In 2001, a year after park opening, Paramount Parks entered into an agreement to manage Terra Mitica, and the park was branded as a Paramount Park for the following season.

Located at 38.5603, -0.158889 (Lat. / Lng.), about 2 miles away.
Wikipedia Article, Homepage
Amusement parks in Spain, Buildings and structures in the Province of Alicante, 2000 establishments in Spain, Animatronic attractions, Visitor attractions in the Valencian Community

Benidorm Island (Valencian: L'illa de Benidorm, Spanish: La isla de Benidorm) is an islet located on the Spanish coast, off the holiday city of Benidorm. Tourists to the area can take boat trips from the mainland to the island to visit the island's wildlife, notably its peacock population. Due to this it is colloquially known as Peacock Island although it is not to be confused with Peacock Island or Pfaueninsel located in river Havel. Benidorm Island is a

Located at 38.5022, -0.130278 (Lat. / Lng.), about 2 miles away.
Wikipedia Article
Islands of Spain, Geography of the Province of Alicante, Protected areas of the Valencian Community

Mundomar is a marine animal park located in Benidorm, in Costa Blanca, Spain. It is twinned with the water park Aqualandia, which is directly adjacent to it, and shares the same car park. There is a viewing area at the top of Mundomar next to the Dolphinarium, which gives a view of the majority of Aqualandia. Many different species can be viewed at Mundomar, including Dolphins, Sea Lions, Penguins, Meerkats and many more marine and land animals.

Located at 38.5407, -0.0934267 (Lat. / Lng.), about 2 miles away.
Wikipedia Article
Oceanaria, Zoos in Spain, Aquaria in Spain, Buildings and structures in the Province of Alicante, Visitor attractions in the Valencian Community

Aqualandia is a waterpark, located in Benidorm in the Costa Blanca, Spain. It is twinned with the marine animal park Mundomar, which is immediately next door to Aqualandia, and shares the same free car park. Water is sourced directly from the sea. Aqualandia contains many water attractions, including water slides, swimming pools, river rapids and sunbathing areas.

Estadio Municipal de Guillermo Amor is a stadium in Benidorm, Alicante, Valencian Community, Spain. Its former name was Estadio Municipal de Foietes or simply Foietes, but its name was changed in 2010 because of Guillermo Amor, one of the most famous sportsman who had born in the town. The sports venue has a capacity of 9,000, the majority of which is on one very large bank of terracing on one side of the field.

The Edificio Kronos is a residential building at Playa de Levante, Benidorm, Spain. At a height of 145 metres (476 feet) it overlooks the surrounding buildings and has magnificent views over Benidorm's bays and mountains.

These are some bigger and more relevant cities in the wider vivinity of Benidorm.