Current time in Aleppo is now 10:58 AM (Thursday). The local timezone is named Asia / Damascus with an UTC offset of 2 hours. We know of 8 airports near Aleppo, of which 3 are larger airports. The closest airport in Syria is Aleppo International Airport in a distance of 4 mi (or 6 km), East. Besides the airports, there are other travel options available (check left side).

There are several Unesco world heritage sites nearby. The closest heritage site in Syria is Ancient City of Aleppo in a distance of 2 mi (or 4 km), North.

When in this area, you might want to pay a visit to some of the following locations: Huraytan, Az Zarbah, Al Hadir, Nubl and As Safirah. To further explore this place, just scroll down and browse the available info. 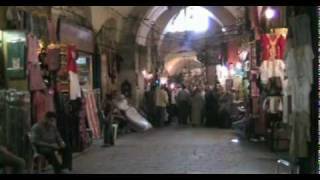 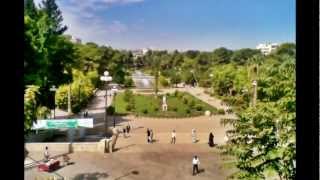 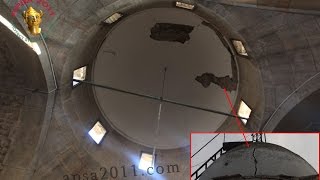 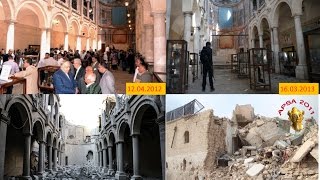 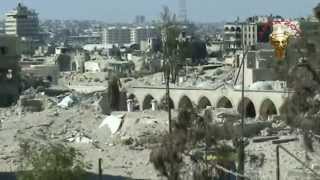 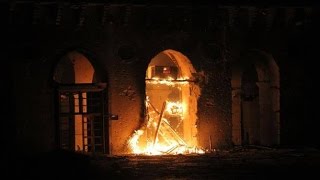 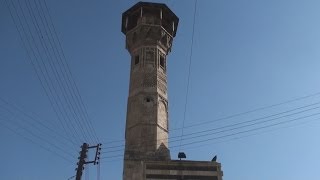 Outside the Al Saffahiyah Mosque and walking Aleppo Streets south-west of the Citadel in "Al-Jalloum" district of the ancient city. This was taken prior to the Syrian civil war. Middle East,Mitt... 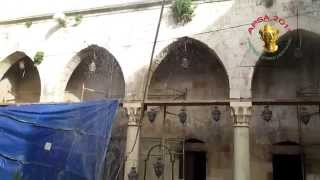 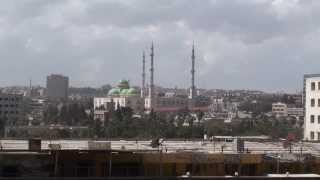 View over Aleppo taken from the old walls of Aleppo in Syria taken prior to The Syrian civil war. Syria,سوريا‎,Sūriyā,سورية,Sūrīyah,ܣܘܪܝܐ,سوریه,Sûrî,Syrian Arab... 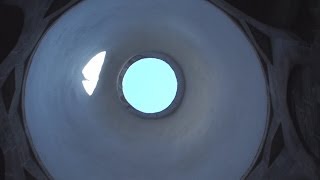 Bimaristan is a Persian word (بیمارستان bīmārestān) meaning "hospital". In the medieval Islamic world, the word "Bimaristan" was used to indicate a hospital where the ill were...

The Siege of Aleppo, the Byzantine stronghold and one of few remaining Byzantine castles in the northern Levant after the decisive Battle of Yarmouk, was laid between July and October 637.

Bab al-Nasr meaning the Gate of Victory, is one of the nine historical gates of the Ancient City of Aleppo, Syria. It was partially ruined during the Ottoman rule over Syria.

Al-Uthmaniyah Madrasa is a madrasah complex located in the northern Al-Farafira district near Bab al-Nasr of the old city of Aleppo, Syria. It was established by Ottoman Pasha Al-Duraki in 1730 and was originally named Madrasa Ridaiya. The madrasa, which includes a mosque, boasts one of the tallest minarets in Aleppo, built in the traditional Ottoman pencil-shaped style. It is centered on a large courtyard with small garden plots.

Al-Sultaniyah Madrasa is a madrasah complex located across from the Citadel entrance in the Ancient city of Aleppo, Syria. It is a religious, educational and funerary complex. It contains the tomb of sultan Malik al-Zaher the son of Ayyubid Sultan Saladin.

Al-Sharafiyah Madrasa is a madrasah complex located to the northeast of the Great Mosque of the Ancient city of Aleppo, Syria. It was founded by 'Abd al-Rahim ibn al-'Ajami and his son Sharaf al-Din 'Abdul Rahman. A waqf was instituted for the madrasa in 1242, the year of its completion. The building is rectangular with the elaborately ornamented entrance portal situated in the middle of the western side.

Al-Ahmadiyah Madrasa is a madrasah complex located in the Jallum district of old Aleppo, Syria. The architectural style of this building resembles the Tekyes structures. The madrasa is rich with rare types of calligraphy used in the ornate inscriptions.

Al-Halawiyah Madrasa is a madrasah complex located in al-Jalloum district of the Ancient city of Aleppo, Syria. It is built in 1124 on the site of Aleppo's Great Byzantine Cathedral of Saint Helena of the 5th century, where, according to tradition, a Roman temple once stood. Saint Helena, mother of Constantine the Great, built a great Byzantine cathedral there.

Hammam Yalbugha is a Mamluk-era public bath in Aleppo, Syria. The hammam was built in 1491 by the Emir of Aleppo Saif ad-Din Yalbugha al-Naseri. It is located next to the entrance of the Citadel of Aleppo, on the banks of the Quweiq river.

Sabaa Bahrat Square is one of the most important squares in Aleppo, Syria. Located at the intersection of "Abdel Menem Riyad street" with "Al-Mutanabbi" street within the ancient part of the city, the square is an important junction between the old city and modern Aleppo. Many important official buildings are located around the square, including the Aleppo Chamber of Industry, Coral Julia Dumna Hotel and the main entrance of Suweiqa; one of the largest covered markets of the old city.

The Siege of Aleppo lasted from 18 January 1260 to 24 January 1260. After receiving the submission of Haran and Edessa, Hulagu Khan crossed the Euphrates, sacked Menbij and placed Aleppo under siege. For six days the city was under siege. Assisted by catapults and mangonels, Mongol, Armenian and Frankish forces overran the entire city, except for the citadel which held out until 25 February and was demolished following its capitulation.

The siege of Aleppo refers to several massacres, as part of a military operation conducted by forces of the Syrian government led by Hafez al-Assad in 1980 within the armed conflict between the Sunni groups, including the Muslim Brotherhood, and the al-Assad government.

Khanqah al-Farafira is a 13th century sufi monastery located in "Al-Farafira" district at the heart of the Ancient City of Aleppo, Syria. It was built in 1237 by the efforts of Dayfa Khatun the regent ruler of Aleppo from 1237 to 1244 and the wife of Az-Zahir Ghazi. The building was a centre for sufis and dervishes. The original name of the building was ar-Rabat al-Nasiri.

These districts belong to Aleppo.

These are districts that are close by, but belong to a different city than Aleppo.

These are some bigger and more relevant cities in the wider vivinity of Aleppo.