Ḩamāh in Hama Governorate with it's 460,602 habitants is a city located in Syria about 115 mi (or 185 km) north of Damascus, the country's capital town.

Current time in Ḩamāh is now 10:20 PM (Tuesday). The local timezone is named Asia / Damascus with an UTC offset of 3 hours. We know of 8 airports closer to Ḩamāh, of which 5 are larger airports. The closest airport in Syria is Bassel Al-Assad International Airport in a distance of 49 mi (or 79 km), West. Besides the airports, there are other travel options available (check left side).

There are several Unesco world heritage sites nearby. The closest heritage site in Syria is Crac des Chevaliers and Qal’at Salah El-Din in a distance of 37 mi (or 60 km), South-West.

Since you are here already, you might want to pay a visit to some of the following locations: Souran, Ar Rastan, Muhradah, Harbinafsah and Kafr Zayta. To further explore this place, just scroll down and browse the available info. 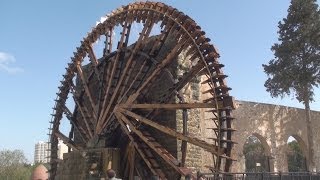 The Norias of Hama are a number of norias ("wheels of pots") Water Wheels along the Orontes River in the city of Hama, Syria. Only seventeen of the original norias remain. They are mostly unused... 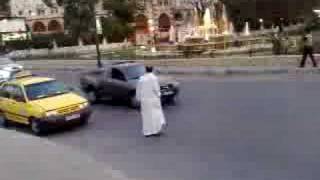 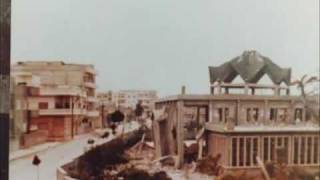 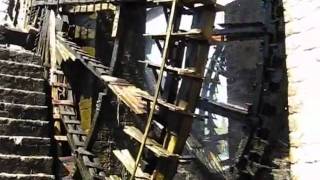 Listen the sound of old norias in Hama, Syria. 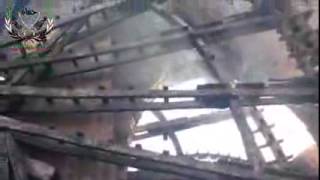 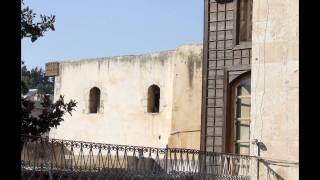 Hama and it's nouria's, Syria

Hama, the 5th largest city of Syria is famous for it's nouria's. They are up to 20 meters in diameter and were used to irrigate the higher ground around the Orontes river bed. The oldest nouria's... 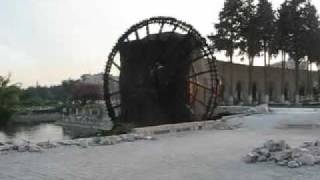 The sights and sounds of a creaking, groaning noria (ناعورة) on the Orontes River at Hama. 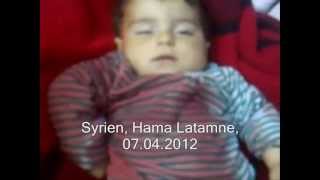 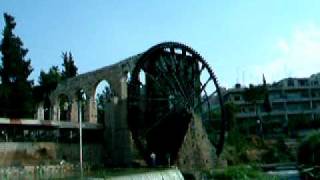 Hama (Hamāh Biblical Ḥamāth, is a city on the banks of the Orontes River in west-central Syria. It is located 213 kilometres north of Damascus and 46 kilometres north of Homs. It is the provincial capital of the Hama Governorate. With a population of 698,928, Hama is the fourth-largest city in Syria after Aleppo, Damascus and Homs. The city is renowned for its seventeen norias used for watering the gardens, which are locally claimed to date back to 1100 BC.

The battle of Hama, sometimes called The battle of Hamath, was a battle between the Babylonians and the fleeing remains of the Egyptian army defeated at Carchemish. It was fought near the ancient city Hamath on the Orontes. In this battle Nebuchadrezzar further shattered the remains of Necho II's Egyptian army that he had previously defeated in the Battle of Carchemish. The battle is mentioned in the Babylonian Chronicles, now housed in the British Museum.

The Nur Al-Din Mosque is a Zengid-era mosque in Hama, Syria, located on the banks of the Orontes river. The mosque was erected by Nur ad-Din Zangi in 1172. The square minaret, made of alternating bands of black basalt and yellow limestone, is the mosque's strongest feature. Inside the mosque, the intricately carved wooden minbar still stands as one of the oldest preserved testaments to Islamic history.

The Great Mosque of Hama, is a mosque in Hama, Syria. It is located about 400 meters west of the citadel. Built in the 8th century CE, it was heavily damaged in a 1982 uprising, but today it has been completely restored.

The Norias of Hama are a number of norias ("wheels of pots") along the Orontes River in the city of Hama, Syria. Only seventeen of the original norias remain. They are mostly unused now and serve an aesthetic purpose. They were called "the most splendid norias ever constructed. " The norias of Hama were submitted as a tentative World Heritage Site by the Syrian Arab Republic in June 1999.

Located at 35.1353, 36.7531 (Lat. / Lng.), about 0 miles away.
Wikipedia Article
Aqueducts in Syria, Buildings and structures in Hama, Cultural Sites on the UNESCO World Heritage Tentative List

The Azm Palace is an 18th-century Ottoman palace in Hama, Syria located at the center of the city on the banks of the Orontes River, about 400 meters south of the Hama Citadel. Ross Burns, author of Monuments of Syria, reportedly considers the Azm Palace to be "one of the loveliest Ottoman residential buildings in Syria."

The Abu'l-Fida Mosque is an Ayyubid-era mosque in Hama, Syria, located on the banks of the Orontes river. The mosque was erected by Abu'l-Fida in 1326.

These districts belong to Ḩamāh.

These are districts that are close by, but belong to a different city than Ḩamāh.

These are some bigger and more relevant cities in the wider vivinity of Ḩamāh.