Phra Nakhon in Phra Nakhon (Bangkok) is a city in Thailand a little north of Bangkok, the country's capital.

Local time in Phra Nakhon is now 09:01 AM (Thursday). The local timezone is named Asia / Bangkok with an UTC offset of 7 hours. We know of 8 airports in the vicinity of Phra Nakhon, of which two are larger airports. The closest airport in Thailand is Don Mueang International Airport in a distance of 13 mi (or 20 km), North-East. Besides the airports, there are other travel options available (check left side).

There are several Unesco world heritage sites nearby. The closest heritage site in Thailand is Historic City of Ayutthaya in a distance of 40 mi (or 65 km), North. If you need a place to sleep, we compiled a list of available hotels close to the map centre further down the page.

Depending on your travel schedule, you might want to pay a visit to some of the following locations: Bangkok, Pom Prap Sattru Phai, Bangkok Noi, Dusit and Ratchathewi. To further explore this place, just scroll down and browse the available info. 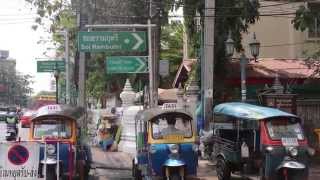 Next to Khao San Road is the slightly lower key Rambuttri Village area. I stayed here and it was actually nice to get away from the crazyness of Khoa San. Lots of food stalls and restaurants.... 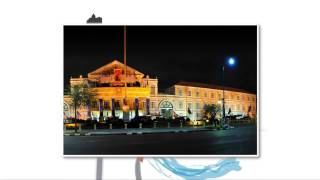 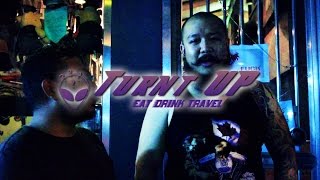 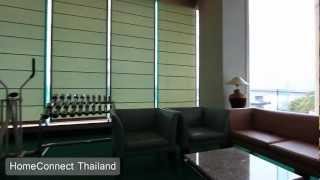 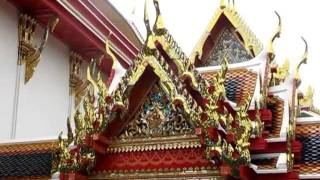 My trip in Thailand on august 26-september 9-2011,泰國,タイ,ประเทศไทย,Таиланд, 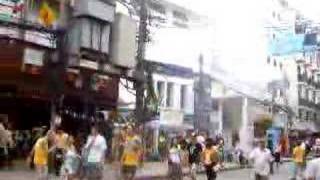 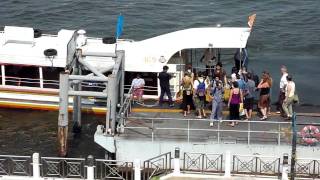 Riverboat at Pier 13 on the Chao Phraya river in Bangkok.

View on the Phra Athit pier (Nr. 13) at the Chao Phraya river of Bangkok. On the video you can see how a riverboat (orange flag) is stopping at the pier. This video is taken from the fourth... 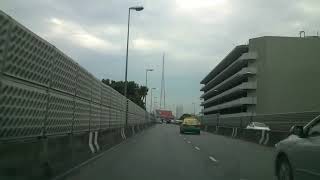 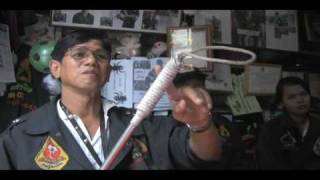 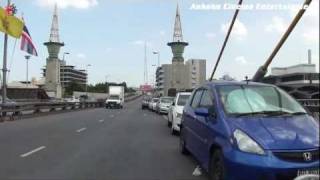 Khaosan Road or Khao Sarn Road is a short street in central Bangkok, Thailand. It is located in the Banglamphu area of about 1 km north of the Grand Palace and Wat Phra Kaew. "Khaosan" translates as "milled rice", a reminder that in former times the street was a major Bangkok rice market. In the last 20 years, however, Khaosan Road has developed into a world famous "backpacker ghetto".

The Democracy Monument (Thai: อนุสาวรีย์ประชาธิปไตย Anusawari Prachathipatai) is a public monument in the centre of Bangkok, capital of Thailand. It occupies a traffic circle on the wide east-west Ratchadamnoen Klang Road, at the intersection of Dinso Road. The monument is roughly halfway between Sanam Luang, the former royal cremation ground in front of Wat Phra Kaew, and the temple of the Golden Mount (Phu Kao Thong).

Rajadamnern Boxing Stadium or, in Thai, Sanam Muay Rajadamnern, is an indoor sporting arena located in Bangkok, Thailand. Along with Lumpinee Stadium, the Rajadamnern is one of the two main stadiums for modern Muay Thai. The stadium has its own ranking system and championship titles up to Middleweight (160 lbs). Muay thai contests are held on every Mondays, Wednesdays, Thursdays, and Sundays. The fights usually start around 6.30 p.m.

The Phra Pin-klao Bridge is a bridge over the Chao Phraya River in Bangkok, in Thailand near the Grand Palace. It is named after Pinklao, vice-king of Siam 1851-66. The bridge was opened on September 24, 1973.

Wat Bowonniwet Vihara Rajavaravihara is a major Buddhist temple in Phra Nakhon district, Bangkok, Thailand. The temple is a center of the Thammayut Nikaya school of Thai Theravada Buddhism and has been a major temple of patronage for the Chakri dynasty. It is the shrine-hall of Phra Phutthachinasi (พระพุทธชินสีห์) which was moulded in about 1357. It is where many royal princes studied and served their monkhood, including king Bhumibol.

Mahamakut Buddhist University or MBU is one of the two public Buddhist universities in Thailand. Founded in 1893 as an educational institute for monks, by King Chulalongkorn in remembrance of his late father King Mongkut. The Thai government granted the university a status of public university in 1997, integrating MBU into the Thai higher education system.

The Rama VIII Bridge is a cable-stayed bridge crossing the Chao Phraya River in Bangkok, Thailand. It was conceived to alleviate traffic congestion on the nearby Phra Pinklao Bridge. Construction of the bridge took place from 1999 to 2002. The bridge was opened on 7 May 2002 and inaugurated on 20 September, which is the birth anniversary of the late King Ananda Mahidol (Rama VIII), after whom it is named.

Located at 13.7692, 100.497 (Lat. / Lng.), about 0 miles away.
Wikipedia Article
Cable-stayed bridges in Thailand, Crossings of the Chao Phraya River, Bridges in Bangkok, Road transport in Bangkok, Bridges completed in 2002

The National Gallery of Thailand is an art gallery located in Bangkok, Thailand.

The Bangkok National Museum is the main branch museum of the National Museums in Thailand. It features exhibits of Thai art and history. The museum was established and opened in 1874 by King Rama V to exhibit relics from the rule of King Rama IV's rule. Today the galleries contain exhibits covering Thai History back to Neolithic times.

The National Art Gallery of the Thailand is the main exhibition gallery for modern art, located in Bangkok.

Bank of Thailand Museum is a museum in Bangkok, Thailand. The museum is housed in the Bang Khun Prom Palace, the former residence of HRH Prince Paribatra Sukhumbhand, who was the 33rd son of King Chulalongkorn.

Wat Intharawihan or Wat Intharavihan is a wat located in the Nakhon District of Bangkok, Thailand. It was built at the beginning of the Ayutthaya period and was originally called Wat Rai Phrik. One of the main features is a 32-metre high, 10-meter wide standing Buddha referred to as Luang Pho To or "Phra Si Ariyamettrai". It took over 60 years to complete and is decorated in glass mosaics and 24-carat gold. The topknot of the Buddha image contains a relic of Lord Buddha brought from Sri Lanka.

These are some bigger and more relevant cities in the wider vivinity of Phra Nakhon.

This place is known by different names. Here the ones we know:
Phra Nakhon, พระนคร