Phra Pradaeng in Changwat Samut Prakan with it's 171,333 habitants is a town located in Thailand a little south of Bangkok, the country's capital town.

Time in Phra Pradaeng is now 09:42 PM (Thursday). The local timezone is named Asia / Bangkok with an UTC offset of 7 hours. We know of 8 airports closer to Phra Pradaeng, of which two are larger airports. The closest airport in Thailand is Suvarnabhumi Airport in a distance of 14 mi (or 23 km), East. Besides the airports, there are other travel options available (check left side).

There are several Unesco world heritage sites nearby. The closest heritage site in Thailand is Historic City of Ayutthaya in a distance of 48 mi (or 77 km), North. In need of a room? We compiled a list of available hotels close to the map centre further down the page.

Since you are here already, you might want to pay a visit to some of the following locations: Rat Burana, Thung Khru, Yan Nawa, Bang Kho Laem and Sathon. To further explore this place, just scroll down and browse the available info. 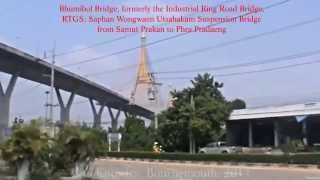 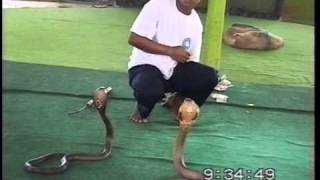 In the Klong's from Bangkok we have visited a Reptile Zoo 1997. They snakes 1:10 still have Venom, after the show he show us ,he take the Snake's Head and a Glass and pressing the Venom out... 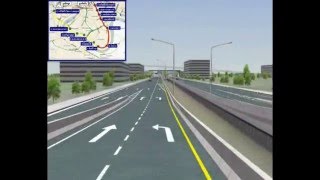 May 2010 in Bangkok there is a new public transport system, which will work next to the BTS, MRT, SRT and Airport Link. BRT Bus Rapid Transit is a new transit system in Bangkok, Thailand.... 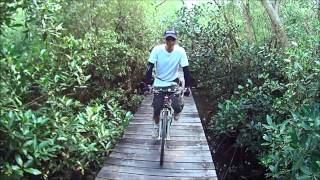 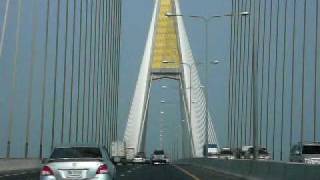 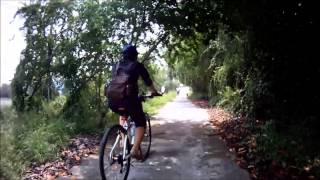 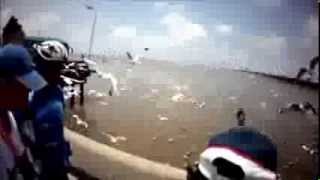 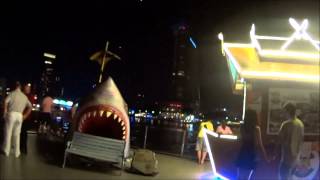 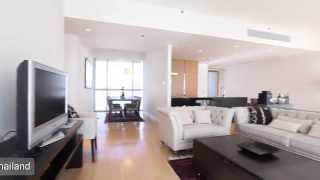 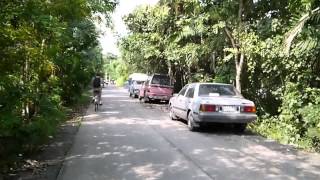 A bicycle ride around Phra Pradaeng - a green oasis in Bangkok, Thailand. Check out our travel adventures at www.thebigmangolife.com.

King Mongkut's University of Technology Thonburi is a leading technology academy in Thailand, focusing on teaching and researching in engineering and technology as well as serving industry. The short famous name of the university is "Bangmod", a local name for the area around the university. KMUTT is located in Thung Khru district, Bangkok and it was officially founded on April 18, 1960.

The Bhumibol Bridge, also known as the Industrial Ring Road Bridge is part of the 13 km long Industrial Ring Road connecting southern Bangkok with Samut Prakan Province. The bridge crosses the Chao Phraya River twice, with two striking cable-stayed spans of lengths of 702 m and 582 m supported by two diamond-shaped pylons 173 m and 164 m high. Where the two spans meet, another road rises to join them at a free-flowing interchange suspended 50 metres above the ground.

Rama IX Bridge is a bridge in Bangkok, Thailand over the Chao Phraya river. It connects the Yan Nawa district to Rat Burana district as a part of the Dao Khanong – Port Section of Chalerm Maha Nakhon Expressway. The bridge was named in honour of King Bhumibol Adulyadej's 60th birthday; the opening date coincides with the King's birthday. It was the first cable-stayed bridge in Thailand and had the second longest cable-stayed span in the world when it opened in 1987.

The Rama III Bridge, also known as the New Krungthep Bridge, is a bridge crossing the Chao Phraya river in Bangkok, Thailand. The bridge was completed in 1999 and was designed to alleviate traffic congestion on the adjacent Krungthep Bridge.

Central Plaza Rama 3 is a shopping center located on Sathupradit Rd in Yannawa district, Bangkok, Thailand. The mall opened in 1997 and is one of Central Group's largest shopping centers.

Chalerm Phrakiat Bang Mod Stadium is a multi-purpose stadium in Thung Khru, Thailand. It is currently used mostly for football matches and is the home stadium of Bangkok F.C.. The stadium holds 8,000 people.

MS Siritara Ocean Queen was a cruise ship owned since 2006 by Siritara Enterprise in Thailand. She was built in 1964 by VEB Mathias-Thesen Werft, Wismar, East Germany as Bashkiriya for the Soviet Union's Black Sea Shipping Company. It was named after an Autonomous Soviet Socialist Republic in the former Soviet Union Bashkir Autonomous Soviet Socialist Republic.

These are some bigger and more relevant cities in the wider vivinity of Phra Pradaeng.