Current time in Isfahan is now 07:57 AM (Monday). The local timezone is named Asia / Tehran with an UTC offset of 3.5 hours. We know of 6 airports near Isfahan. The closest airport in Iran is Esfahan Shahid Beheshti International Airport in a distance of 13 mi (or 21 km), North-East. Besides the airports, there are other travel options available (check left side).

There are two Unesco world heritage sites nearby. The closest heritage site in Iran is Meidan Emam, Esfahan in a distance of 0 mi (or 1 km), North-East. Looking for a place to stay? we compiled a list of available hotels close to the map centre further down the page.

When in this area, you might want to pay a visit to some of the following locations: Khomeyni Shahr, Dowlatabad, Falavarjan, Shahin Shahr and Najafabad. To further explore this place, just scroll down and browse the available info. 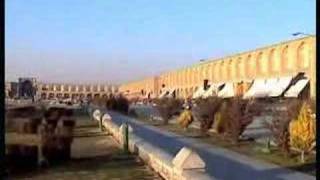 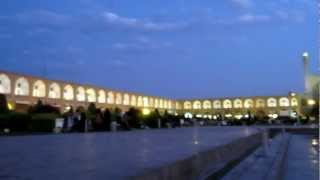 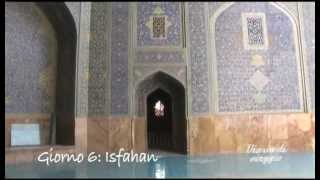 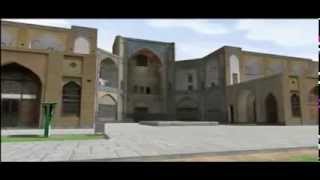 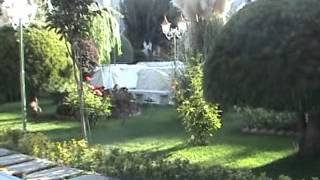 The gardens at the Abbasi Hotel, Isfahan

The lovely gardens at the Abbasi Hotel. 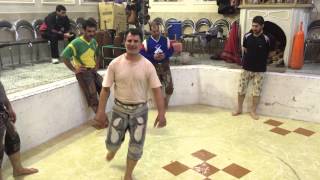 Home of nougat in Esfahan - Iran glucose was first imported by Haj Mohammad Ghalamdani from north west of Iran (russia) to augment the traditional formula handed to him from his Grand father.... 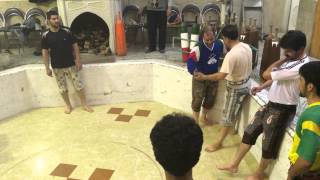 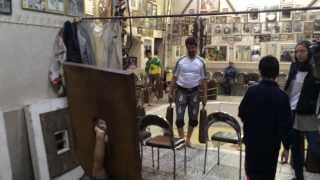 Naqsh-e Jahan Square, known as Imam Square (میدان امام), formerly known as Shah Square (میدان شاه), is a square situated at the center of Isfahan city, Iran. Constructed between 1598 and 1629, it is now an important historical site, and one of UNESCO's World Heritage Sites. It is 160 meters wide by 508 meters long (an area of 89,600 m). The square is surrounded by buildings from the Safavid era. The Shah Mosque is situated on the south side of this square.

Ālī Qāpū is a grand palace in Isfahan, Iran. It is located on the western side of the Naqsh-e Jahan Square opposite to Sheikh lotf allah mosque, and had been originally designed as a vast portal. It is forty-eight meters high and there are seven floors, each accessible by a difficult spiral staircase. In the sixth floor music room, deep circular niches are found in the walls, having not only aesthetic value, but also acoustic.

Imam Mosque, is a mosque in Isfahan, Iran standing in south side of Naghsh-i Jahan Square. Built during the Safavid period, it is an excellent example of Islamic architecture of Iran, and regarded as one of the masterpieces of Persian Architecture. The Shah Mosque of Esfahan is one of the everlasting masterpieces of architecture in Iran. It is registered, along with the Naghsh-i Jahan Square, as a UNESCO World Heritage Site.

Sheikh Lutfollah Mosque is one of the architectural masterpieces of Safavid Iranian architecture, standing on the eastern side of Naghsh-i Jahan Square, Isfahan, Iran. Construction of the mosque started in 1603 and was finished in 1618. It was built by the chief architect Shaykh Bahai, during the reigh of Shah Abbas I of the Safavid dynasty. It is registered, along with the Naghsh-i Jahan Square, as a UNESCO World Heritage Site.

Chahar Bagh Boulevard is a historical avenue in Isfahan constructed in the Safavid era of Iran. The avenue is the most historically famous in all of Persia. It connects north of city to south and is about 6 kilometers long. On the west side are situated the Gardens of the Vazirs, and on the east the Hasht Behesht and Chehel Sotoun gardens.

Hasht Behesht, meaning "Eight Paradises" is a Safavid era palace in Isfahan. It was built in 1669 and is today protected by Iran's Cultural Heritage Organization. Of more than forty mansion which existed in Isfahan during the rule of Safavids, this is the only one left today.

Chahār Bāgh school (Madreseye Chahār Bāgh in Persian or مدرسه چهار باغ), also known as Shah school, is a 16-17th century cultural complex in Isfahan, Iran. The compound was built during Soltan Hossein, a Safavid king, to serve as a theological and clerical school to train those who were interested in such sciences. In order to finance the school, Soltan Hossein's mother had a large caravansary built nearby, the income of which went to the foundation.

The Abbasi Hotel (formerly known as the Shah Abbas Hotel) is a hotel located in Isfahan, Iran. This complex was built at the time of king Sultan Husayn of Safavid about 300 years ago. It was built as a caravansary to provide lodging for passengers. The structure has been renovated since the 1950s to fight and prevent degradation. The 1974 film Ten Little Indians, starring Oliver Reed and Elke Sommer, was shot here.

Adab High School in Isfahan, Iran, was established in the early 20th century by British Anglican missionaries as an all-boys school. It was later converted to a secular school under the direction of Isa Sadiq (a man of letters and Minister of Education) and under the administration of Sayyid Yahya DowlatAbadi. Adab High School was the only all-boys high school in Isfahan with its own swimming pool and soccer field.

Constitution House of Isfahan, also known as Khaneh Mashrouteh or Khaneh Haj Aqa Nourrollah, is a historical edifice located next to the Great Naqsh-e Jahan Square, on Neshat Ave in Isfahan, Iran. During the years that led to the Persian Constitutional Revolution. Afterwards the house was used as a gathering place of the leaders, activists and sympathizers of the movement. The address of constitution house is No. 14 Neshat Ave.

These districts belong to Isfahan.

These are districts that are close by, but belong to a different city than Isfahan.

These are some bigger and more relevant cities in the wider vivinity of Isfahan.