Nêdong in Tibet Autonomous Region is a city in China about 1,576 mi (or 2,536 km) south-west of Beijing, the country's capital.

Local time in Nêdong is now 01:30 AM (Tuesday). The local timezone is named Asia / Urumqi with an UTC offset of 6 hours. We know of 8 airports in the vicinity of Nêdong. The closest airport in China is Lhasa Gonggar Airport in a distance of 52 mi (or 84 km), West. Besides the airports, there are other travel options available (check left side).

There is one Unesco world heritage site nearby. It's Historic Ensemble of the Potala Palace, Lhasa in a distance of 50 mi (or 80 km), North-West. If you need a place to sleep, we compiled a list of available hotels close to the map centre further down the page.

Depending on your travel schedule, you might want to pay a visit to some of the following locations: Naidong, Changzhug, Pozhang, Dopozhang and Layu. To further explore this place, just scroll down and browse the available info.

Ya Long He Hotel 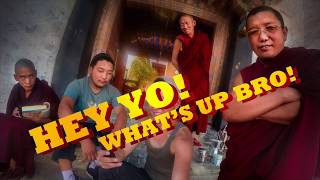 Nêdong County, is a county of the Shannan Prefecture in the Tibet Autonomous Region. Changzhug Temple, an important and very early, Buddhist monastery, dating to the reign of Songtsen Gampo, is located in the Yarlung Valley in Nêdong as is the Yungbulakang Palace.

Tradruk Temple, also written Changzhug Monastery, in the Yarlung Valley is the earliest great geomantic temple after the Jokhang - and some sources say it is even pre-dates the Jokhang. It is located in Nêdong County of Lhoka (Shannan) Prefecture in the Tibet Autonomous Region of China, about seven kilometres south of the county seat Tsetang.

Nedong or Netong, is a village in the Tibet Autonomous Region of China. Nedong was the seat of the Phagmodrupa dynasty which was the dominating regime in Tibet from 1354 to 1435 and maintained a degree of authority until the early 17th century.

The Yarlung Valley is formed by the Yarlung River and refers especially to the district where it joins with the Chongye River, and broadens out into a large plain about 2 km wide, before they flow north into the Yarlung Tsangpo River or Brahmaputra. It is situated in Nedong County of Lhokha Prefecture in the Tibet Autonomous Region of China. The capital of Lhokha Prefecture, Zêtang, in the Yarlung Valley, is one of Tibet's largest cities, and is 183 km southeast of Lhasa.

These are some bigger and more relevant cities in the wider vivinity of Nêdong.