Current time in Lhasa is now 03:01 PM (Monday). The local timezone is named Asia / Urumqi with an UTC offset of 6 hours. We know of 2 airports closer to Lhasa. The closest airport in China is Lhasa Gonggar Airport in a distance of 27 mi (or 43 km), South-West. Besides the airports, there are other travel options available (check left side).

There is one Unesco world heritage site nearby. It's Historic Ensemble of the Potala Palace, Lhasa in a distance of 1 mi (or 2 km), North-East. In need of a room? We compiled a list of available hotels close to the map centre further down the page.

Since you are here already, you might want to pay a visit to some of the following locations: Jibenggang, Niu, Nam, Caina and Konggar. To further explore this place, just scroll down and browse the available info. 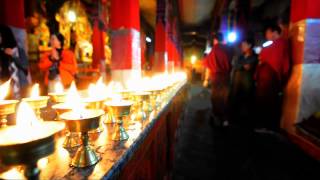 The first of a 3 part series on Tibet by travel & videography tragic Adam Mussolum.

These are some bigger and more relevant cities in the wider vivinity of Lhasa.