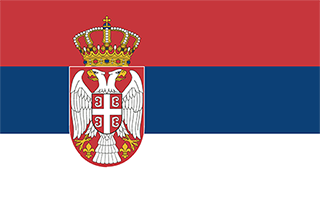 Safety Score: 3,6 of 5.0 based on data from 9 authorites. Meaning please reconsider your need to travel to Serbia.

Serbia with its capital Belgrade is located in Europe (Southeastern Europe, between Macedonia and Hungary). It covers some 77,475 square kilometers (slightly smaller than South Carolina) with 7,111,020 citizens. Serbian, Hungarian and Bosnian are the languages commonly used by the people in Serbia (consider regional differences). Albania, Bosnia and Herzegovina, Bulgaria, Croatia, Hungary, Kosovo, Macedonia, Montenegro and Romania are bordering countries.

Serbia is a country located in the Balkans, in Southern Europe. Serbia is a lovely country, open for tourism all year round. During summer tourists love spending their time in Belgrade and enjoy the nature of many national parks throughout the country. Serbia's many sights include stunning castles, Medieval monasteries, lovely traditional villages and bustling cities with baroque parks and art-deco architecture. Of the several national parks and natural areas in the country, Fruška Gora is undoubtedly one of the best. Dotted with ancient monasteries and wineries, it combines orchards and vineyards on its vast plains with tight forests on its plains. The Tara National Park covers some 20.000 hectares in the west of the country.

The landscape is extremely varied with to the north, rich fertile plains, to the east, limestone ranges and basins as well as to the southeast, ancient mountains and hills. The average density of population is about 92 per km². The climate in Serbia can be described as in the north, continental climate (cold winters and hot, humid summers with well-distributed rainfall) with in other parts, continental and Mediterranean climate (relatively cold winters with heavy snowfall and hot, dry summers and autumns). Potential threats by nature are destructive earthquakes.

To reach someone Serbia dial +381 prior to a number. The local cellular networks are operated on 900 MHz, 1800 MHz, 3G, 4G. Websites typically end with the top level domain ".rs". If you want to bring electric appliances (e.g. battery chaarger), keep in min the local 230 V - 50 Hz (plugs: C, F). The sign for the locally used currency Dinar is RSD.

Three equal horizontal stripes of red (top), blue, and white - the Pan-Slav colors representing freedom and revolutionary ideals; charged with the coat of arms of Serbia shifted slightly to the hoist side; the principal field of the coat of arms represents the Serbian state and displays a white two-headed eagle on a red shield; a smaller red shield on the eagle represents the Serbian nation, and is divided into four quarters by a white cross; interpretations vary as to the meaning and origin of the white, curved symbols resembling firesteels or Cyrillic "C's" in each quarter; a royal crown surmounts the coat of arms.

The Kingdom of Serbs, Croats, and Slovenes was formed in 1918; its name was changed to Yugoslavia in 1929. Communist Partisans resisted the Axis occupation and division of Yugoslavia from 1941 to 1945 and fought nationalist opponents and collaborators as well. The military and political movement headed by Josip Broz "TITO" (Partisans) took full control of Yugoslavia when their domestic rivals and the occupiers were defeated in 1945. Although communists, TITO and his successors (Tito died in 1980) managed to steer their own path between the Warsaw Pact nations and the West for the next four and a half decades. In 1989, Slobodan MILOSEVIC became president of the Republic of Serbia and his ultranationalist calls for Serbian domination led to the violent breakup of Yugoslavia along ethnic lines. In 1991, Croatia, Slovenia, and Macedonia declared independence, followed by Bosnia in 1992. The remaining republics of Serbia and Montenegro declared a new Federal Republic of Yugoslavia (FRY) in April 1992 and under MILOSEVIC's leadership, Serbia led various military campaigns to unite ethnic Serbs in neighboring republics into a "Greater Serbia." These actions ultimately failed and, after international intervention, led to the signing of the Dayton Peace Accords in 1995. MILOSEVIC retained control over Serbia and eventually became president of the FRY in 1997. In 1998, an ethnic Albanian insurgency in the formerly autonomous Serbian province of Kosovo provoked a Serbian counterinsurgency campaign that resulted in massacres and massive expulsions of ethnic Albanians living in Kosovo. The MILOSEVIC government's rejection of a proposed international settlement led to NATO's bombing of Serbia in the spring of 1999. Serbian military and police forces withdrew from Kosovo in June 1999, and the UN Security Council authorized an interim UN administration and a NATO-led security force in Kosovo. FRY elections in late 2000 led to the ouster of MILOSEVIC and the installation of democratic government. In 2003, the FRY became the State Union of Serbia and Montenegro, a loose federation of the two republics. Widespread violence predominantly targeting ethnic Serbs in Kosovo in March 2004 led to more intense calls to address Kosovo's status, and the UN began facilitating status talks in 2006. In June 2006, Montenegro seceded from the federation and declared itself an independent nation. Serbia subsequently gave notice that it was the successor state to the union of Serbia and Montenegro. In February 2008, after nearly two years of inconclusive negotiations, Kosovo declared itself independent of Serbia - an action Serbia refuses to recognize. At Serbia's request, the UN General Assembly (UNGA) in October 2008 sought an advisory opinion from the International Court of Justice (ICJ) on whether Kosovo's unilateral declaration of independence was in accordance with international law. In a ruling considered unfavorable to Serbia, the ICJ issued an advisory opinion in July 2010 stating that international law did not prohibit declarations of independence. In late 2010, Serbia agreed to an EU-drafted UNGA Resolution acknowledging the ICJ's decision and calling for a new round of talks between Serbia and Kosovo, this time on practical issues rather than Kosovo's status. Serbia and Kosovo signed the first agreement of principles governing the normalization of relations between the two countries in April 2013 and are in the process of implementing its provisions. In 2015, Serbia and Kosovo reached four additional agreements within the Brussels Dialogue framework. These included agreements on the Community of Serb-Majority Municipalities; telecommunications; energy production and distribution; and freedom of movement. Prime Minister Aleksandar VUCIC, has promoted an ambitious goal of Serbia joining the EU by 2020. Under his leadership, in January 2014 Serbia opened formal negotiations for accession. Serbia has opened 8 chapters of the EU acquis and provisionally closed 2 chapters.