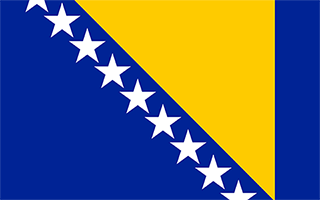 Safety Score: 3,7 of 5.0 based on data from 9 authorites. Meaning please reconsider your need to travel to Bosnia and Herzegovina.

Bosnia and Herzegovina with its capital Sarajevo is located in Europe (Southeastern Europe, bordering the Adriatic Sea and Croatia). It covers some 51,198 square kilometers (slightly smaller than West Virginia) with a population of 3,856,180. Bosnian, Croatian and Serbian are the languages spoken by people in Bosnia and Herzegovina (consider regional differences). Croatia, Montenegro and Serbia are bordering countries.

Bosnia and Herzegovina is a Balkan country that was formerly part of Yugoslavia. Mostly mountainous, it has access to a tiny portion of the Adriatic Sea coastline in the south. Bosnia and Herzegovina ranked next to The Former Yugoslav Republic of Macedonia as the poorest republic in the old Yugoslav federation. Although agriculture is almost all in private hands, farms are small and inefficient, and the republic traditionally is a net importer of food. Cycling can be beautiful in Bosnia. Other traffic is not so much used how to relate to bikes on their way. Hitching is not advised, and walking between towns can prove dangerous (including in areas which may not have been de-mined).

Popular Destinations in Bosnia and Herzegovina

Administrative regions of Bosnia and Herzegovina

The topography is mountains and valleys. The average density of population is about 75 per km². The climate in Bosnia and Herzegovina can be described as hot summers and cold wintersareas of high elevation have short, cool summers and long, severe winters, mild, rainy winters along coast. Potential natural disasters are destructive earthquakes.

To reach someone Bosnia and Herzegovina dial +387 prior to a number. The local cellular networks are operated on 900 MHz, 1800 MHz, 3G, 4G. Websites typically end with the top level domain ".ba". If you want to bring electric appliances (e.g. battery chaarger), keep in min the local 230 V - 50 Hz (plugs: C, F). The sign for the locally used currency Marka is BAM.

A wide blue vertical band on the fly side with a yellow isosceles triangle abutting the band and the top of the flag; the remainder of the flag is blue with seven full five-pointed white stars and two half stars top and bottom along the hypotenuse of the triangle; the triangle approximates the shape of the country and its three points stand for the constituent peoples - Bosniaks, Croats, and Serbs; the stars represent Europe and are meant to be continuous (thus the half stars at top and bottom); the colors (white, blue, and yellow) are often associated with neutrality and peace, and traditionally are linked with Bosnia.

Bosnia and Herzegovina declared sovereignty in October 1991 and independence from the former Yugoslavia on 3 March 1992 after a referendum boycotted by ethnic Serbs. The Bosnian Serbs - supported by neighboring Serbia and Montenegro - responded with armed resistance aimed at partitioning the republic along ethnic lines and joining Serb-held areas to form a "Greater Serbia." In March 1994, Bosniaks and Croats reduced the number of warring factions from three to two by signing an agreement creating a joint Bosniak-Croat Federation of Bosnia and Herzegovina. On 21 November 1995, in Dayton, Ohio, the warring parties initialed a peace agreement that ended three years of interethnic civil strife (the final agreement was signed in Paris on 14 December 1995). The Dayton Peace Accords retained Bosnia and Herzegovina's international boundaries and created a multiethnic and democratic government charged with conducting foreign, diplomatic, and fiscal policy. Also recognized was a second tier of government composed of two entities roughly equal in size: the predominantly Bosniak-Bosnian Croat Federation of Bosnia and Herzegovina and the predominantly Bosnian Serb-led Republika Srpska (RS). The Federation and RS governments are responsible for overseeing most government functions. Additionally, the Dayton Accords established the Office of the High Representative to oversee the implementation of the civilian aspects of the agreement. The Peace Implementation Council at its conference in Bonn in 1997 also gave the High Representative the authority to impose legislation and remove officials, the so-called "Bonn Powers." An original NATO-led international peacekeeping force (IFOR) of 60,000 troops assembled in 1995 was succeeded over time by a smaller, NATO-led Stabilization Force (SFOR). In 2004, European Union peacekeeping troops (EUFOR) replaced SFOR. Currently, EUFOR deploys around 600 troops in theater in a security assistance and training capacity.