Albania with its capital Tirana is located in Europe (Southeastern Europe, bordering the Adriatic Sea and Ionian Sea). It covers some 28,749 square kilometers (slightly smaller than Maryland) with a population of 3,047,990. Albanian and Modern Greek are the languages spoken by people in Albania. Greece, Kosovo, Macedonia, Montenegro and Serbia are bordering countries. 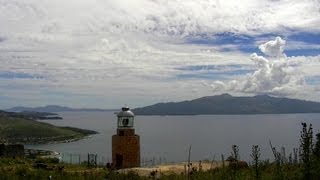 Albania is a small country in the Balkans. The relative majority of the people in Albania are of Muslim heritage (70-80%), Albania also has a large number of religious minorities (mainly Albanian Orthodox and Roman Catholic-the largest Christian minorities in Europe along with Bosnia and Herzegovina). Traditional Albanian culture honors the role and person of the guest. In return for this place of honor, respect is expected from the guest. Albanians enjoy the long walks the city streets, drinking coffee, and among the younger generations, partaking in nightlife activities such as cafe lounging and dancing. It's an extremely poor country by European standards.

The topography is mostly mountains and hills with small plains along coast. The average density of population is about 106 per km². The climate in Albania can be described as mild temperatecool, cloudy, wet winters, hot, clear, dry summers, interior being cooler and wetter. Potential natural disasters are destructive earthquakes, drought, floods and tsunamis occur along southwestern coast.

To reach someone Albania dial +355 prior to a number. The local cellular networks are operated on 900 MHz, 1800 MHz, 3G, 4G. Websites typically end with the top level domain ".al". If you want to bring electric appliances (e.g. battery chaarger), keep in min the local 230 V - 50 Hz (plugs: C, F). The sign for the locally used currency Lek is ALL.

Red with a black two-headed eagle in the center; the design is claimed to be that of 15th-century hero George Kastrioti SKANDERBEG, who led a successful uprising against the Ottoman Turks that resulted in a short-lived independence for some Albanian regions (1443-78); an unsubstantiated explanation for the eagle symbol is the tradition that Albanians see themselves as descendants of the eagle; they refer to themselves as "Shqiptare," which translates as "sons of the eagle".

Albania declared its independence from the Ottoman Empire in 1912, but was conquered by Italy in 1939 and occupied by Germany in 1943. Communist partisans took over the country in 1944. Albania allied itself first with the USSR (until 1960), and then with China (to 1978). In the early 1990s, Albania ended 46 years of xenophobic communist rule and established a multiparty democracy. The transition has proven challenging as successive governments have tried to deal with high unemployment, widespread corruption, dilapidated infrastructure, powerful organized crime networks, and combative political opponents. Albania has made progress in its democratic development since first holding multiparty elections in 1991, but deficiencies remain. Most of Albania's post-communist elections were marred by claims of electoral fraud; however, international observers judged elections to be largely free and fair since the restoration of political stability following the collapse of pyramid schemes in 1997. Albania joined NATO in April 2009 and in June 2014 became a candidate for EU accession. Albania in November 2016 received a European Commission recommendation to open EU accession negotiations conditioned upon implementation of a judicial reform package passed earlier the same year. Although Albania's economy continues to grow, it has slowed, and the country is still one of the poorest in Europe. A large informal economy and a weak energy and transportation infrastructure remain obstacles.