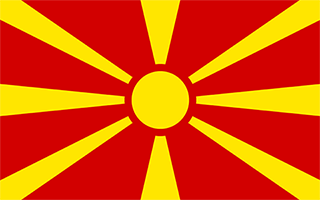 Macedonia with its capital Skopje is located in Europe (Southeastern Europe, north of Greece). It covers some 25,714 square kilometers (slightly larger than Vermont) with a population of 2,103,720. Macedonian, Albanian, Turkish and Serbian are the languages spoken by people in Macedonia (consider regional differences). Albania, Bulgaria, Greece, Kosovo and Serbia are bordering countries.

Macedonia is a landlocked country in the Balkans. It is bordered by Serbia and the disputed region of Kosovo to the north, Albania to the west, Bulgaria to the east, and Greece to the south. Macedonia is covered by mountainous territory marked by deep basins and valleys. There are three large lakes, each divided by a frontier line, and the country bisected by the Vardar River. Macedonia is blessed with outstanding natural beauty. Do not miss a trip to one of the large lakes, Pelister Mountains, Shar Planina in the West, and the fascinating rolling hills and mountains of the East with its rice fields.

The topography is mountainous with deep basins and valleys with three large lakes, each divided by a frontier line as well as country bisected by the Vardar River. The average density of population is about 82 per km². The climate in Macedonia can be described as warm, dry summers and autumns with relatively cold winters with heavy snowfall. Potential natural disasters are high seismic risks.

To reach someone Macedonia dial +389 prior to a number. The local cellular networks are operated on 900 MHz, 1800 MHz, 3G, 4G. Websites typically end with the top level domain ".mk". If you want to bring electric appliances (e.g. battery chaarger), keep in min the local 230 V - 50 Hz (plugs: C, F). The sign for the locally used currency Denar is MKD.

A yellow sun (the Sun of Liberty) with eight broadening rays extending to the edges of the red field; the red and yellow colors have long been associated with Macedonia.

Macedonia gained its independence peacefully from Yugoslavia in 1991. Greek objection to Macedonia’s name, insisting it implies territorial pretensions to the northern Greek province of the same name, and democratic backsliding have stalled the country’s movement toward Euro-Atlantic integration. Immediately after Macedonia declared independence, Greece sought to block Macedonian efforts to gain UN membership if the name “Macedonia” was used. Macedonia was eventually admitted to the UN in 1993 as “The Former Yugoslav Republic of Macedonia,” and at the same time it agreed to UN-sponsored negotiations on the name dispute. In 1995, Greece lifted a 20-month trade embargo and the two countries agreed to normalize relations, but the issue of the name remained unresolved and negotiations for a solution are ongoing. Since 2004, the US and over 130 other nations have recognized Macedonia by its constitutional name, Republic of Macedonia. Ethnic Albanian grievances over perceived political and economic inequities escalated into an insurgency in 2001 that eventually led to the internationally brokered Ohrid Framework Agreement (OFA), which ended the fighting and established guidelines for constitutional amendments and the creation of new laws that enhanced the rights of minorities. Relations between Macedonians and ethnic Albanians remain fragile, however. Macedonia has been engulfed in a political crisis that began after the 2014 legislative and presidential election, and which escalated in 2015 when the opposition party began releasing wiretap content that it alleged showed widespread government corruption. Although Macedonia became an EU candidate in 2005, the country still faces challenges, including overcoming the political crisis, fully implementing the OFA, resolving the outstanding name dispute with Greece, improving relations with Bulgaria, halting democratic backsliding, and stimulating economic growth and development. At the 2008 NATO Summit in Bucharest, Romania, the Allies agreed that Macedonia would be invited to join the Alliance as soon as a mutually acceptable resolution to the name dispute was reached with Greece.