Democratic Republic of the Congo
in Middle Africa
Africa

Safety Score: 3,7 of 5.0 based on data from 9 authorites. Meaning please reconsider your need to travel to Democratic Republic of the Congo.

Explore Democratic Republic of the Congo 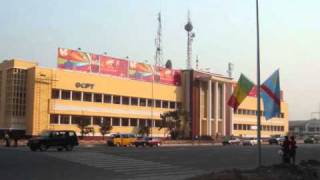 Parts of the Democratic Republic of the Congo are not safe for independent travel or sightseeing. Those visiting for business, research, or international aid purposes should consult with their organization and seek expert guidance before planning a trip. Kinshasa has a high crime rate similar to Lagos or Abidjan.

Popular Destinations in Democratic Republic of the Congo

Administrative regions of Democratic Republic of the Congo

The landscape is vast central basin being a low-lying plateau and mountains in east. The average density of population is about 36 per km². The climate in Democratic Republic of the Congo can be described as tropicalhot and humid in equatorial river basin, cooler and drier in southern highlands, cooler and wetter in eastern highlands, north of Equator - wet season (April to October), dry season (December to February), south of Equator - wet season (November to March), dry season (April to October). Potential threats by nature are active volcanoes in the east along the Great Rift Valley, Congo River floods (seasonal), Nyiragongo (3,470 m), which erupted in 2002 and is experiencing ongoing activity, poses a major threat to the city of Goma, home to a quarter million people; the volcano produces unusually fast-moving lava, known to travel up to 100 km /hr; Nyiragongo has and periodic droughts in south.

To reach someone Democratic Republic of the Congo dial +243 prior to a number. The local cellular networks are operated on 900 MHz, 1800 MHz, 3G, 4G. Websites typically end with the top level domain ".cd". If you want to bring electric appliances (e.g. battery chaarger), keep in min the local 220 V - 50 Hz (plugs: C, D, E). The sign for the locally used currency Franc is CDF.

Sky blue field divided diagonally from the lower hoist corner to upper fly corner by a red stripe bordered by two narrow yellow stripes; a yellow, five-pointed star appears in the upper hoist corner; blue represents peace and hope, red the blood of the country's martyrs, and yellow the country's wealth and prosperity; the star symbolizes unity and the brilliant future for the country.

Established as an official Belgian colony in 1908, the then-Republic of the Congo gained its independence in 1960, but its early years were marred by political and social instability. Col. Joseph MOBUTU seized power and declared himself president in a November 1965 coup. He subsequently changed his name - to MOBUTU Sese Seko - as well as that of the country - to Zaire. MOBUTU retained his position for 32 years through several sham elections, as well as through brutal force. Ethnic strife and civil war, touched off by a massive inflow of refugees in 1994 from fighting in Rwanda and Burundi, led in May 1997 to the toppling of the MOBUTU regime by a rebellion backed by Rwanda and Uganda and fronted by Laurent KABILA. KABILA renamed the country the Democratic Republic of the Congo (DRC), but in August 1998 his regime was itself challenged by a second insurrection again backed by Rwanda and Uganda. Troops from Angola, Chad, Namibia, Sudan, and Zimbabwe intervened to support KABILA's regime. In January 2001, KABILA was assassinated and his son, Joseph KABILA, was named head of state. In October 2002, the new president was successful in negotiating the withdrawal of Rwandan forces occupying the eastern DRC; two months later, the Pretoria Accord was signed by all remaining warring parties to end the fighting and establish a government of national unity. A transitional government was set up in July 2003; it held a successful constitutional referendum in December 2005 and elections for the presidency, National Assembly, and provincial legislatures took place in 2006. In 2009, following a resurgence of conflict in the eastern DRC, the government signed a peace agreement with the National Congress for the Defense of the People (CNDP), a primarily Tutsi rebel group. An attempt to integrate CNDP members into the Congolese military failed, prompting their defection in 2012 and the formation of the M23 armed group - named after the 23 March 2009 peace agreements. Renewed conflict led to large population displacements and significant human rights abuses before the M23 was pushed out of DRC to Uganda and Rwanda in late 2013 by a joint DRC and UN offensive. In addition, the DRC continues to experience violence committed by other armed groups including the Democratic Forces for the Liberation of Rwanda, the Allied Democratic Forces, and assorted Mai Mai militias. In the most recent national elections, held in November 2011, disputed results allowed Joseph KABILA to be reelected to the presidency. The DRC Constitution bars President KABILA from running for a third term, but the DRC Government has delayed national elections originally slated for November 2016. The failure to hold elections as scheduled has fueled sporadic street protests by KABILA’s opponents. In late December 2016, government officials and opposition leaders struck a last-minute deal that will require KABILA to step down after elections to be held by the end of 2017.