Butembo
in North Kivu of Province du Nord-Kivu, Democratic Republic of the Congo

Safety Score: 3,7 of 5.0 based on data from 9 authorites. Meaning please reconsider your need to travel to Democratic Republic of the Congo.

Local time in Butembo is now 07:00 AM (Wednesday). The local timezone is named Africa / Lubumbashi with an UTC offset of 2 hours. We know of 8 airports in the vicinity of Butembo. The closest is airport we know is Beni Airport in Kiribati in a distance of 32 mi (or 52 km). Besides the airports, there are other travel options available (check left side).

When in this area, you might want to pay a visit to some of the following locations: Kasese, Kihihi, Rubirizi, Bundibugyo and Fort Portal. To further explore this place, just scroll down and browse the available info. 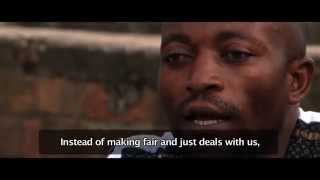 http://www.officenumberfour.com The Democratic Republic of Congo seems not to have found peace yet. The atrocities done, the greediness of foreign powers, the inconsistency of local istitutions...

Butembo is a city in North Kivu, in the north eastern Democratic Republic of Congo, lying west of the Virunga National Park. Until the Congo Civil War, it was an important commercial centre with a large market, a cathedral, a small hospital, and an airport, lying in an area known for tea and coffee growing. As of 2010 it had an estimated population of 200,000.

On Sunday 14 September 2008, a riot broke out in connection with a football game in Butembo, province of Nord-Kivu, in the eastern part of the Democratic Republic of the Congo. The teams playing were Socozaki and Nyuki System, which are two local clubs whose games are considered derbies. The riots were sparked by accusations that one of the football players was using witchcraft.

These are some bigger and more relevant cities in the wider vivinity of Butembo.

This place is known by different names. Here the ones we know:
Butembo, RUE, Бутембо

These are the most popular locations in Democratic Republic of the Congo on Tripmondo.