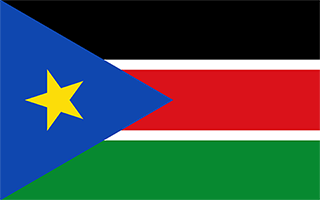 South Sudan with its capital is located in Africa (East-Central Africa; south of Sudan, north of Uganda and Kenya). It covers some 644,330 square kilometers (more than four times the size of Georgia) with a population of 13,026,100. English is the language spoken by people in South Sudan. Central African Republic, Democratic Republic of the Congo, Ethiopia, Kenya, Sudan and Uganda are bordering countries.

The terrain is plains in the north and center rise to southern highlands along the border with Uganda and Kenya with the White Nile, flowing north out of the uplands of Central Africa, being the major geographic feature of the country as well as The Sudd (a name derived from floating vegetation that hinders navigation) being a large swampy area of more than 100,000 sq km fed by the waters of the White Nile that dominates the center of the country. The average density of population is about 20 per km². The climate in South Sudan can be described as hot with seasonal rainfall influenced by the annual shift of the Inter-Tropical Convergence Zone with rainfall heaviest in upland areas of the south and diminishes to the north.

To reach someone South Sudan dial prior to a number. The local cellular networks are operated on . Websites typically end with the top level domain "". If you want to bring electric appliances (e.g. battery chaarger), keep in min the local . The sign for the locally used currency is .

Three equal horizontal bands of black (top), red, and green; the red band is edged in white; a blue isosceles triangle based on the hoist side contains a gold, five-pointed star; black represents the people of South Sudan, red the blood shed in the struggle for freedom, green the verdant land, and blue the waters of the Nile; the gold star represents the unity of the states making up South Sudan.

Egypt attempted to colonize the region of southern Sudan by establishing the province of Equatoria in the 1870s. Islamic Mahdist revolutionaries overran the region in 1885, but in 1898 a British force was able to overthrow the Mahdist regime. An Anglo-Egyptian Sudan was established the following year with Equatoria being the southernmost of its eight provinces. The isolated region was largely left to itself over the following decades, but Christian missionaries converted much of the population and facilitated the spread of English. When Sudan gained its independence in 1956, it was with the understanding that the southerners would be able to participate fully in the political system. When the Arab Khartoum government reneged on its promises, a mutiny began that led to two prolonged periods of conflict (1955-1972 and 1983-2005) in which perhaps 2.5 million people died - mostly civilians - due to starvation and drought. Ongoing peace talks finally resulted in a Comprehensive Peace Agreement, signed in January 2005. As part of this agreement, the south was granted a six-year period of autonomy to be followed by a referendum on final status. The result of this referendum, held in January 2011, was a vote of 98% in favor of secession. Since independence on 9 July 2011, South Sudan has struggled with good governance and nation building and has attempted to control rebel militia groups operating in its territory. Economic conditions have deteriorated since January 2012 when the government decided to shut down oil production following bilateral disagreements with Sudan. In December 2013, conflict between government and opposition forces led to a humanitarian crisis with millions of South Sudanese displaced and food insecure. The warring parties signed a peace agreement in August 2015 that created a transitional government of national unity in April 2016. However, in July 2016, fighting broke out between the two principal signatories plunging the country back into conflict.