Pagan Village in Pagan Island (Northern Islands) with it's 50 habitants is located in Northern Mariana Islands about 201 mi (or 324 km) north of Saipan, the country's capital town.

Current time in Pagan Village is now 10:34 PM (Sunday). The local timezone is named Pacific / Saipan with an UTC offset of 10 hours. Unfortunatly there are no larger airports in the vicinity of this location. The sidebar provides some ideas about how to get here.

While being here, you might want to pay a visit to some of the following locations: Saipan, San Jose, , and . To further explore this place, just scroll down and browse the available info. 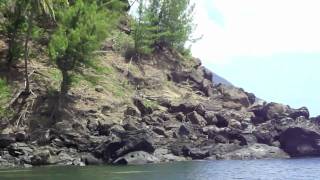 Pagan is an island in the Marianas archipelago, under the political jurisdiction of the Commonwealth of the Northern Mariana Islands, located at {{#invoke:Coordinates|coord}}{{#coordinates:18.10|N|145.76|E|type:isle_region:US-MP|||| |primary |name= }}, approximately 320 kilometers north of the CNMI's capital, Saipan. Pagan has an area of 47.23 km² (18.24 sq mi), making it the fourth largest island of the Northern Marianas, and consists of two stratovolcanoes joined by a narrow strip of land.

Northern Islands Municipality is one of the four main political divisions of the Commonwealth of the Northern Mariana Islands. It consists of a long string of the northernmost islands of the Northern Marianas, including (from north to south) Farallon de Pajaros, the Maug Islands, Asuncion, Agrihan, Pagan, Alamagan, Guguan, Zealandia Bank, Sarigan, Anatahan, and Farallon de Medinilla. The total land area of the islands, including offshore islets and rocks, is 154.755 km² (59.75 sq mi).

Pagan Airstrip is a public airport located on Pagan Island in the United States Commonwealth of the Northern Mariana Islands, near the village of Shomu-Shon. The airport is owned by Commonwealth Ports Authority.

These are some bigger and more relevant cities in the wider vivinity of Pagan Village.

This place is known by different names. Here the ones we know:
Bandera, Bandeera, Shomushon, Pagan Island