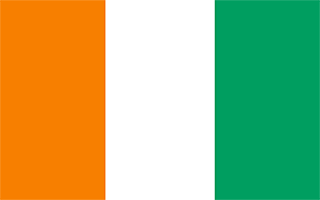 Safety Score: 3,7 of 5.0 based on data from 9 authorites. Meaning please reconsider your need to travel to Ivory Coast.

The nation appears to be returning to a state of normalcy - however, ask your Government for detailled information on travel conditions.

Côte d'Ivoire (Ivory Coast) is a country in West Africa. It has a southerly facing North Atlantic Ocean coast. Close ties to France since independence in 1966, the development of cocoa production for export, and foreign investment made Côte d'Ivoire one of the most prosperous of the tropical African states, but did not protect it from political turmoil. . The coast has heavy surf and no natural harbors; during the rainy season torrential flooding is possible. Mostly flat to undulating plains; mountains in northwest. Most of the inhabitants live along the sandy coastal region. Apart from the capital area, the forested interior is sparsely populated. Inter-city travel in Côte d'Ivoire is usually more comfortable than travel in neighboring African countries. The roads are generally in good condition and the bus service is relatively modern. The down side is the very frequent military check-points which add hours to a trip. You should get a vaccine for Hepatitis A before coming. Still, even street foods are fairly clean. The UK's Foreign and Commonwealth office as well as the U.S. State Department advises against all travel to Côte d'Ivoire at this time.

The topography is mostly flat to undulating plains with mountains in northwest. The average density of population is about 75 per km². The climate in Ivory Coast can be described as tropical along coast, semiarid in far north with three seasons - warm and dry (November to March), hot and dry (March to May), hot and wet (June to October). Potential natural disasters are coast has heavy surf and no natural harbors during the rainy season torrential flooding is possible

To reach someone Ivory Coast dial +225 prior to a number. The local cellular networks are operated on 900 MHz, 1800 MHz, 4G. Websites typically end with the top level domain ".ci". If you want to bring electric appliances (e.g. battery chaarger), keep in min the local 220 V - 50 Hz (plugs: C, E). The sign for the locally used currency Franc is XOF.

Three equal vertical bands of orange (hoist side), white, and green; orange symbolizes the land (savannah) of the north and fertility, white stands for peace and unity, green represents the forests of the south and the hope for a bright future.

Close ties to France following independence in 1960, the development of cocoa production for export, and foreign investment all made Cote d'Ivoire one of the most prosperous of the West African states but did not protect it from political turmoil. In December 1999, a military coup - the first ever in Cote d'Ivoire's history - overthrew the government. Junta leader Robert GUEI blatantly rigged elections held in late 2000 and declared himself the winner. Popular protest forced him to step aside and an election brought Laurent GBAGBO into power. Ivoirian dissidents and disaffected members of the military launched a failed coup attempt in September 2002 that developed into a rebellion and then a civil war. In 2003, a cease-fire resulted in the country being divided with the rebels holding the north, the government the south, and peacekeeping forces a buffer zone between the two. In March 2007, President GBAGBO and former New Forces rebel leader Guillaume SORO signed an agreement in which SORO joined GBAGBO's government as prime minister and the two agreed to reunite the country by dismantling the buffer zone, integrating rebel forces into the national armed forces, and holding elections. Difficulties in preparing electoral registers delayed balloting until 2010. In November 2010, Alassane Dramane OUATTARA won the presidential election over GBAGBO, but GBAGBO refused to hand over power, resulting in a five-month resumption of violent conflict. In April 2011, after widespread fighting, GBAGBO was formally forced from office by armed OUATTARA supporters with the help of UN and French forces. The UN peacekeeping mission is drawing down and is scheduled to depart in June 2017. OUATTARA is focused on rebuilding the country's economy and infrastructure while rebuilding the security forces. GBAGBO is in The Hague on trial for crimes against humanity.