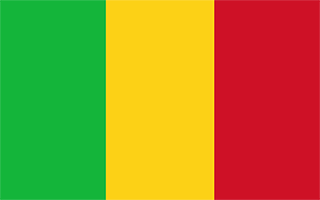 Safety Score: 4,6 of 5.0 based on data from 9 authorites. Meaning it is not safe to travel Mali.

Mali with its capital Bamako is located in Africa (interior Western Africa, southwest of Algeria). It covers some 1,240,191 square kilometers (slightly less than twice the size of Texas) with a population of 17,885,200. French and Bambara are the languages spoken by people in Mali. Algeria, Burkina Faso, Guinea, Ivory Coast, Mauritania, Niger and Senegal are bordering countries.

Mali is a landlocked country in the Sahel, bordered by Algeria, Niger, Burkina Faso, Cote d'Ivoire, Guinea, Senegal, and Mauritania. Festival in the Desert takes place in January on the sand northwest of Timbuktu. Three days of amazing music, under the stars and the moon, tiny tents, camel races, and more music and dancing. The Great Mosque The Great Mosque is made completely of mud, was made in 1906, and it has five stories and three towers. Every spring the people replaster the Mosque. Regretfully, entrance to non-muslims is not allowed.

The topography is mostly flat to rolling northern plains covered by sand with savanna in south, rugged hills in northeast. The average density of population is about 14 per km². The climate in Mali can be described as subtropical to aridhot and dry (February to June), rainy, humid, and mild (June to November), cool and dry (November to February). Potential natural disasters are hot, dust-laden harmattan haze common during dry seasons, occasional Niger River flooding and recurring droughts.

To reach someone Mali dial +223 prior to a number. The local cellular networks are operated on 900 MHz, 3G. Websites typically end with the top level domain ".ml". If you want to bring electric appliances (e.g. battery chaarger), keep in min the local 220 V - 50 Hz (plugs: C, E). The sign for the locally used currency Franc is XOF.

The Sudanese Republic and Senegal became independent of France in 1960 as the Mali Federation. When Senegal withdrew after only a few months, what formerly made up the Sudanese Republic was renamed Mali. Rule by dictatorship was brought to a close in 1991 by a military coup that ushered in a period of democratic rule. President Alpha KONARE won Mali's first two democratic presidential elections in 1992 and 1997. In keeping with Mali's two-term constitutional limit, he stepped down in 2002 and was succeeded by Amadou Toumani TOURE, who was elected to a second term in a 2007 election that was widely judged to be free and fair. Malian returnees from Libya in 2011 exacerbated tensions in northern Mali, and Tuareg ethnic militias rebelled in January 2012. Low- and mid-level soldiers, frustrated with the poor handling of the rebellion, overthrew TOURE on 22 March. Intensive mediation efforts led by the Economic Community of West African States (ECOWAS) returned power to a civilian administration in April with the appointment of Interim President Dioncounda TRAORE. The post-coup chaos led to rebels expelling the Malian military from the country's three northern regions and allowed Islamic militants to set up strongholds. Hundreds of thousands of northern Malians fled the violence to southern Mali and neighboring countries, exacerbating regional food shortages in host communities. An international military intervention to retake the three northern regions began in January 2013 and within a month most of the north had been retaken. In a democratic presidential election conducted in July and August of 2013, Ibrahim Boubacar KEITA was elected president. The Malian Government and northern armed groups signed an internationally-mediated peace accord in June 2015.