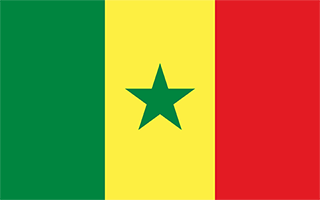 Safety Score: 3,6 of 5.0 based on data from 9 authorites. Meaning please reconsider your need to travel to Senegal.

Senegal with its capital Dakar is located in Africa (Western Africa, bordering the North Atlantic Ocean). It covers some 196,723 square kilometers (slightly smaller than South Dakota) with a population of 14,668,500. French and Wolof are the languages spoken by people in Senegal. Gambia, Guinea, Guinea-Bissau, Mali and Mauritania are bordering countries.

Senegal is a country in Western Africa. With the Atlantic Ocean to the west, Senegal has Guinea-Bissau to the south, Guinea to the southeast, Mali to the east, and Mauritania to the north. Be careful with food prepared by the road, as it could be cooked in unsanitary conditions.

The topography is generally low, rolling, plains rising to foothills in southeast. The average density of population is about 75 per km². The climate in Senegal can be described as tropicalhot, humid, rainy season (May to November) has strong southeast winds, dry season (December to April) dominated by hot, dry, harmattan wind. Potential natural disasters are lowlands seasonally flooded periodic droughts

The French colonies of Senegal and French Sudan were merged in 1959 and granted independence in 1960 as the Mali Federation. The union broke up after only a few months. Senegal joined with The Gambia to form the nominal confederation of Senegambia in 1982. The envisaged integration of the two countries was never implemented, and the union was dissolved in 1989. The Movement of Democratic Forces in the Casamance has led a low-level separatist insurgency in southern Senegal since the 1980s. Several peace deals have failed to resolve the conflict, but an unofficial cease-fire has remained largely in effect since 2012. Senegal remains one of the most stable democracies in Africa and has a long history of participating in international peacekeeping and regional mediation. Senegal was ruled by a Socialist Party for 40 years until Abdoulaye WADE was elected president in 2000. He was reelected in 2007 and during his two terms amended Senegal's constitution over a dozen times to increase executive power and weaken the opposition. His decision to run for a third presidential term sparked a large public backlash that led to his defeat in a March 2012 runoff with Macky SALL, whose term runs until 2019. A 2016 constitutional referendum reduced the term to five years with a maximum of two consecutive terms for future presidents.