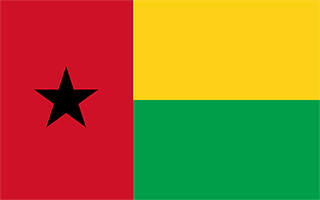 Safety Score: 3,0 of 5.0 based on data from 9 authorites. Meaning we advice caution when travelling to Guinea-Bissau.

Guinea-Bissau with its capital Bissau is located in Africa (Western Africa, bordering the North Atlantic Ocean). It covers some 36,126 square kilometers (slightly less than three times the size of Connecticut) with 1,792,340 citizens. Portuguese is the official language used in Guinea-Bissau. As an interesting fact, is sharing borders with Guinea and Senegal.

Guinea-Bissau is a former Portuguese colony bordered by Senegal to the north and Guinea to the south and east. To go to the islands, there's a choice between cheap, but rather unsafe, canoas (pirogues) leaving from Porto Pidjiguiti or Porto de Bandim, and expensive modern boats owned by french fishing lodges on the Bijagos islands. As Guinea Bissau is very flat and there is virtually no traffic on the roads outside Bissau, it's a good country for cycling.

The topography is mostly low-lying coastal plain with a deeply indented estuarine coastline rising to savanna in east with numerous off-shore islands including the Arquipelago Dos Bijagos consisting of 18 main islands and many small islets. The average density of population is about 50 per km². The climate in Guinea-Bissau can be described as tropicalgenerally hot and humid, monsoonal-type rainy season (June to November) with southwesterly winds, dry season (December to May) with northeasterly harmattan winds. Potential natural disasters are brush fires hot, dry, dusty harmattan haze may reduce visibility during dry season

To reach someone Guinea-Bissau dial +245 prior to a number. The local cellular networks are operated on 900 MHz, 1800 MHz, 4G. Websites typically end with the top level domain ".gw". If you want to bring electric appliances (e.g. battery chaarger), keep in min the local 220 V - 50 Hz (plugs: C). The sign for the locally used currency Franc is XOF.

Two equal horizontal bands of yellow (top) and green with a vertical red band on the hoist side; there is a black five-pointed star centered in the red band; yellow symbolizes the sun; green denotes hope; red represents blood shed during the struggle for independence; the black star stands for African unity.

Since independence from Portugal in 1974, Guinea-Bissau has experienced considerable political and military upheaval. In 1980, a military coup established authoritarian General Joao Bernardo 'Nino' VIEIRA as president. Despite eventually setting a path to a market economy and multiparty system, VIEIRA's regime was characterized by the suppression of political opposition and the purging of political rivals. Several coup attempts through the 1980s and early 1990s failed to unseat him. In 1994 VIEIRA was elected president in the country's first free, multiparty election. A military mutiny and resulting civil war in 1998 eventually led to VIEIRA's ouster in May 1999. In February 2000, a transitional government turned over power to opposition leader Kumba YALA after he was elected president in transparent polling. In September 2003, after only three years in office, YALA was overthrown in a bloodless military coup, and businessman Henrique ROSA was sworn in as interim president. In 2005, former President VIEIRA was reelected, pledging to pursue economic development and national reconciliation; he was assassinated in March 2009. Malam Bacai SANHA was elected in an emergency election held in June 2009, but he passed away in January 2012 from a long-term illness. A military coup in April 2012 prevented Guinea-Bissau's second-round presidential election - to determine SANHA's successor - from taking place. Following mediation by the Economic Community of Western African States, a civilian transitional government assumed power in 2012 and remained until Jose Mario VAZ won a free and fair election in 2014. A long-running dispute between factions in the ruling PAIGC party has brought the government to a political impasse; there have been five prime ministers since August 2015.