Guyana with its capital Georgetown is located in South America (Northern South America, bordering the North Atlantic Ocean). It covers some 214,970 square kilometers (slightly smaller than Idaho) with 737,718 citizens. English is the official language used in Guyana. Brazil, Suriname and Venezuela are bordering countries. 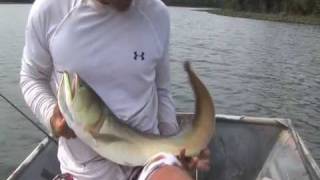 Guyana is a country in north-eastern South America. It has an Atlantic Ocean coastline in the northeast, and lies between Suriname to the east and Venezuela to the west, with Brazil to the south. Eco-Tourism is a booming industry in Guyana.

The topography is mostly rolling highlands with low coastal plain as well as savanna in south. The average density of population is about 3 per km². The climate in Guyana can be described as tropicalhot, humid, moderated by northeast trade winds, two rainy seasons (May to August, November to January). Potential natural disasters are flash flood threat during rainy seasons.

Green with a red isosceles triangle (based on the hoist side) superimposed on a long, yellow arrowhead; there is a narrow, black border between the red and yellow, and a narrow, white border between the yellow and the green; green represents forest and foliage; yellow stands for mineral resources and a bright future; white symbolizes Guyana's rivers; red signifies zeal and the sacrifice of the people; black indicates perseverance.

Originally a Dutch colony in the 17th century, by 1815 Guyana had become a British possession. The abolition of slavery led to settlement of urban areas by former slaves and the importation of indentured servants from India to work the sugar plantations. The resulting ethnocultural divide has persisted and has led to turbulent politics. Guyana achieved independence from the UK in 1966, and since then it has been ruled mostly by socialist-oriented governments. In 1992, Cheddi JAGAN was elected president in what is considered the country's first free and fair election since independence. After his death five years later, his wife, Janet JAGAN, became president but resigned in 1999 due to poor health. Her successor, Bharrat JAGDEO, was elected in 2001 and again in 2006. Early elections held in May 2015 resulted in the first change in governing party and the replacement of President Donald RAMOTAR by current President David GRANGER