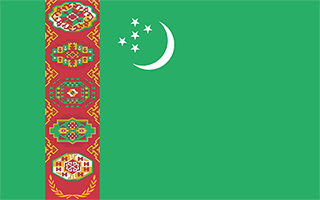 Safety Score: 3,2 of 5.0 based on data from 9 authorites. Meaning please reconsider your need to travel to Turkmenistan.

Turkmenistan with its capital Ashgabat is located in Asia (Central Asia, bordering the Caspian Sea). It covers some 488,101 square kilometers (slightly more than three times the size of Georgia) with 5,351,280 citizens. Turkmen, Russian and Uzbek are the common languages used in Turkmenistan (consider regional differences). Afghanistan, Iran, Kazakhstan and Uzbekistan are bordering countries.

Turkmenistanis a country in Central Asia with a population of about 5 million, and an area around half a million km2, or almost the size of Spain. Turkmenistan is one of just two Stalinist countries in existence (the other being North Korea) and the government is in firm control of nearly everything, although, surprisingly, tourism is welcomed as long as you don't discuss politics or omnipresent police/military.

The topography is flat-to-rolling sandy desert with dunes rising to mountains in the south with low mountains along border with Iran as well as borders Caspian Sea in west. The average density of population is about 11 per km². The climate in Turkmenistan can be described as subtropical desert. Potential natural disasters are droughts, dust storms, earthquakes, floods and mudslides.

To reach someone Turkmenistan dial +993 prior to a number. The local cellular networks are operated on 900 MHz, 1800 MHz, 3G, 4G. Websites typically end with the top level domain ".tm". If you want to bring electric appliances (e.g. battery chaarger), keep in min the local 220 V - 50 Hz (plugs: C, F). The sign for the locally used currency Manat is TMM.

Green field with a vertical red stripe near the hoist side, containing five tribal guls (designs used in producing carpets) stacked above two crossed olive branches; five white stars and a white crescent moon appear in the upper corner of the field just to the fly side of the red stripe; the green color and crescent moon represent Islam; the five stars symbolize the regions or welayats of Turkmenistan; the guls reflect the national identity of Turkmenistan where carpet-making has long been a part of traditional nomadic life.

Present-day Turkmenistan covers territory that has been at the crossroads of civilizations for centuries. The area was ruled in antiquity by various Persian empires, and was conquered by Alexander the Great, Muslim armies, the Mongols, Turkic warriors, and eventually the Russians. In medieval times, Merv (located in present-day Mary province) was one of the great cities of the Islamic world and an important stop on the Silk Road. Annexed by Russia in the late 1800s, Turkmenistan later figured prominently in the anti-Bolshevik movement in Central Asia. In 1924, Turkmenistan became a Soviet republic; it achieved independence upon the dissolution of the USSR in 1991. Extensive hydrocarbon/natural gas reserves, which have yet to be fully exploited, have begun to transform the country. The Government of Turkmenistan is moving to expand its extraction and delivery projects and has attempted to diversify its gas export routes beyond Russia's pipeline network. In 2010, new gas export pipelines that carry Turkmen gas to China and to northern Iran began operating, effectively ending the Russian monopoly on Turkmen gas exports. In 2016, Russia and Iran halted their purchase of gas from Turkmenistan making China the only buyer of Turkmen gas. President for Life Saparmurat NYYAZOW died in December 2006, and Turkmenistan held its first multi-candidate presidential election in February 2007. Gurbanguly BERDIMUHAMEDOW, a deputy cabinet chairman under NYYAZOW, emerged as the country's new president. He was reelected in 2012 and again in 2017 with over 97% of the vote in both instances, in elections widely regarded as undemocratic.