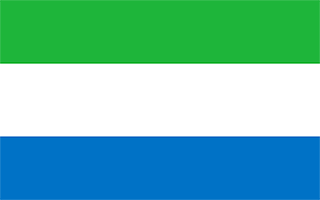 Safety Score: 3,5 of 5.0 based on data from 9 authorites. Meaning please reconsider your need to travel to Sierra Leone.

Sierra Leone with its capital Freetown is located in Africa (Western Africa, bordering the North Atlantic Ocean). It covers some 71,741 square kilometers (slightly smaller than South Carolina) with a population of 6,163,200. English is the official language spoken by people in Sierra Leone. As an interesting fact, is sharing borders with Guinea and Liberia.

Sierra Leone is on the West Coast of Africa between 7 and 10 degrees N, and longitudes 10.5 and 13 degrees W. The Republic of Guinea is to the north and northeast; Liberia is to the east and southeast, and the Atlantic Ocean on the west and south. Run the Kiln Sierra Leone Marathon - on the 9th June 2012 come to the beautiful countryside of Makeni to run either a marathon, half marathon or 5k in aid of Street Child of Sierra Leone.

The topography is coastal belt of mangrove swamps, wooded hill country, upland plateau, mountains in east. The average density of population is about 86 per km². The climate in Sierra Leone can be described as tropicalhot, humid, summer rainy season (May to December), winter dry season (December to April). Potential natural disasters are dry, sand-laden harmattan winds blow from the Sahara (December to February) sandstorms, dust storms

To reach someone Sierra Leone dial +232 prior to a number. The local cellular networks are operated on 900 MHz, 1800 MHz, 3G. Websites typically end with the top level domain ".sl". If you want to bring electric appliances (e.g. battery chaarger), keep in min the local 230 V - 50 Hz (plugs: D, G). The sign for the locally used currency Leone is SLL.

The British set up a trading post near present-day Freetown in the 17th century. Originally the trade involved timber and ivory, but later it expanded into slaves. Following the American Revolution, a colony was established in 1787 and Sierra Leone became a destination for resettling black loyalists who had originally been resettled in Nova Scotia. After the abolition of the slave trade in 1807, British crews delivered thousands of Africans liberated from illegal slave ships to Sierra Leone, particularly Freetown. The colony gradually expanded inland during the course of the 19th century; independence was attained in 1961. Democracy is slowly being reestablished after the civil war (1991-2002) that resulted in tens of thousands of deaths and the displacement of more than 2 million people (about one third of the population). The military, which took over full responsibility for security following the departure of UN peacekeepers at the end of 2005, has developed as a guarantor of the country's stability; the armed forces remained on the sideline during the 2007 and 2012 national elections. In March 2014, the closure of the UN Integrated Peacebuilding Office in Sierra Leone marked the end of more than 15 years of peacekeeping and political operations in Sierra Leone. The government's stated priorities include furthering development - including recovering from the Ebola epidemic - creating jobs, and stamping out endemic corruption.