Saint Kitts and Nevis with its capital Basseterre is located in North America (Caribbean, islands in the Caribbean Sea). It covers some 262 square kilometers (1.5 times the size of Washington, DC) with 52,715 citizens. English is the language commonly spoken used by the people in Saint Kitts and Nevis. This country shares no land borders with another country. 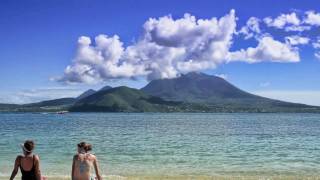 Saint Kitts and Nevis are a pair of tropical islands in the Caribbean, about one-third of the way from Puerto Rico to Trinidad and Tobago. What is really remarkable on St-Kitts and Nevis is the natural aspect. Many tropical birds which one rarely finds elsewhere are present in great concentration in the nature and there are also the famous monkeys which, it is said, were introduced by the pirates. An all-new road permits going to the southeast end of St-Kitts (Turtle Beach) where one feels that a certain febrility in the air will make of this part of the island an appreciated place.

The landscape is volcanic with mountainous interiors. The average density of population is about 202 per km². The climate in Saint Kitts and Nevis can be described as tropical, tempered by constant sea breezeslittle seasonal temperature variation, rainy season (May to November). Potential threats by nature are hurricanes (July to October) Mount Liamuiga (1,156 m) on Saint Kitts, and Nevis Peak (985 m) on Nevis, are both volcanoes that are part of the volcanic island arc of the Lesser Antilles, which extends from Saba in the north to Grenada in the south

Divided diagonally from the lower hoist side by a broad black band bearing two white, five-pointed stars; the black band is edged in yellow; the upper triangle is green, the lower triangle is red; green signifies the island's fertility, red symbolizes the struggles of the people from slavery, yellow denotes year-round sunshine, and black represents the African heritage of the people; the white stars stand for the islands of Saint Kitts and Nevis, but can also express hope and liberty, or independence and optimism.

Carib Indians occupied the islands of the West Indies for hundreds of years before the British began settlement in 1623. In 1967, the island territory of Saint Christopher-Nevis-Anguilla became an associated state of the UK with full internal autonomy. The island of Anguilla rebelled and was allowed to secede in 1971. The remaining islands achieved independence in 1983 as Saint Kitts and Nevis. In 1998, a referendum on Nevis to separate from Saint Kitts fell short of the two-thirds majority vote needed. Nevis continues in its efforts to separate from Saint Kitts.