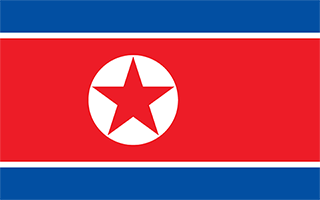 Safety Score: 4,4 of 5.0 based on data from 9 authorites. Meaning please reconsider your need to travel to North Korea.

North Korea with its capital Pyongyang is located in Asia (Eastern Asia, northern half of the Korean Peninsula bordering the Korea Bay and the Sea of Japan). It covers some 120,539 square kilometers (slightly larger than Virginia) with 25,248,100 citizens. Korean is the language commonly spoken used by the people in North Korea. China, Russia and South Korea are bordering countries.

North Korea is a country in East Asia. North Korea can only be visited by an organized tour, but this can be a large group or a party of one. Prices start from around $1000/€700/£580 for a 5-day group tour including accommodation, meals and transport from Beijing, but can go up considerably if you want to travel around the country or independently (as your own one-person escorted group).

The landscape is mostly hills and mountains separated by deep, narrow valleys and wide coastal plains in west, discontinuous in east. The average density of population is about 209 per km². The climate in North Korea can be described as temperate, with rainfall concentrated in summer with long, bitter winters. Potential threats by nature are Changbaishan (2,744 m) (also known as Baitoushan, Baegdu or P'aektu-san), on the Chinese border, is considered historically active, late spring droughts often followed by severe flooding and occasional typhoons during the early fall.

To reach someone North Korea dial +850 prior to a number. The local cellular networks are operated on 3G. Websites typically end with the top level domain ".kp". If you want to bring electric appliances (e.g. battery chaarger), keep in min the local 220 V - 50 Hz (plugs: C). The sign for the locally used currency Won is KPW.

Three horizontal bands of blue (top), red (triple width), and blue; the red band is edged in white; on the hoist side of the red band is a white disk with a red five-pointed star; the broad red band symbolizes revolutionary traditions; the narrow white bands stand for purity, strength, and dignity; the blue bands signify sovereignty, peace, and friendship; the red star represents socialism.

An independent kingdom for much of its long history, Korea was occupied by Japan beginning in 1905 following the Russo-Japanese War. Five years later, Japan formally annexed the entire peninsula. Following World War II, Korea was split with the northern half coming under Soviet-sponsored communist control. After failing in the Korean War (1950-53) to conquer the US-backed Republic of Korea (ROK) in the southern portion by force, North Korea (DPRK), under its founder President KIM Il Sung, adopted a policy of ostensible diplomatic and economic "self-reliance" as a check against outside influence. The DPRK demonized the US as the ultimate threat to its social system through state-funded propaganda, and molded political, economic, and military policies around the core ideological objective of eventual unification of Korea under Pyongyang's control. KIM Il Sung's son, KIM Jong Il, was officially designated as his father's successor in 1980, assuming a growing political and managerial role until the elder KIM's death in 1994. KIM Jong Un was publicly unveiled as his father's successor in 2010. Following KIM Jong Il's death in 2011, KIM Jong Un quickly assumed power and has now taken on most of his father's former titles and duties. After decades of economic mismanagement and resource misallocation, the DPRK since the mid-1990s has faced chronic food shortages. In recent years, the North’s domestic agricultural production has increased, but still falls far short of producing sufficient food to provide for its entire population. The DPRK began to ease restrictions to allow semi-private markets, starting in 2002, but has made few other efforts to meet its goal of improving the overall standard of living. North Korea's history of regional military provocations; proliferation of military-related items; long-range missile development; WMD programs including tests of nuclear devices in 2006, 2009, 2013, 2016, and 2017; and massive conventional armed forces are of major concern to the international community and have limited the DPRK’s international engagement, particularly economically. The regime abides by a policy calling for the simultaneous development of its nuclear weapons program and its economy.