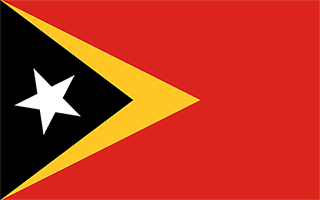 Safety Score: 3,2 of 5.0 based on data from 9 authorites. Meaning please reconsider your need to travel to East Timor.

East Timor with its capital Dili is located in Oceania (Southeastern Asia, northwest of Australia in the Lesser Sunda Islands at the eastern end of the Indonesian archipelago; note - Timor-Leste includes the eastern half of the island of Timor). It covers some 14,875 square kilometers (slightly larger than Connecticut) with 1,291,360 citizens. Portuguese, Indonesian and English are the common languages used in East Timor (consider regional differences). Interesting info Indonesia is the only bordering country.

East Timor is a country in Southeast Asia. It lies northwest of Australia in the Lesser Sunda Islands at the eastern end of the Indonesian archipelago. East Timor has some of the best scuba diving in the world, and this is a major draw for tourists with East Timor shore diving becoming known worldwide amongst the diving community. Pristine beaches and coral reefs stand in stark contrast to one of the poorest populations on Earth. Carnival de Timor is the annual festival held in Dili in middle of April (sometimes in May, depending on rain season). Initiated by the Ministry of Tourism in 2010, Carnival de Timor is all about fun, music and multiculturalism. Both modern and traditional costumes, East Timorese and foreign minorities, even embassies also participate in this annual festival.

The landscape is mountainous. The average density of population is about 87 per km². The climate in East Timor can be described as tropicalhot, humid, distinct rainy and dry seasons. Potential threats by nature are earthquakes, floods and landslides are common, tropical cyclones and tsunamis.

Red with a black isosceles triangle (based on the hoist side) superimposed on a slightly longer yellow arrowhead that extends to the center of the flag; a white star - pointing to the upper hoist-side corner of the flag - is in the center of the black triangle; yellow denotes the colonialism in Timor-Leste's past; black represents the obscurantism that needs to be overcome; red stands for the national liberation struggle; the white star symbolizes peace and serves as a guiding light.

The Portuguese began to trade with the island of Timor in the early 16th century and colonized it in mid-century. Skirmishing with the Dutch in the region eventually resulted in an 1859 treaty in which Portugal ceded the western portion of the island. Imperial Japan occupied Portuguese Timor from 1942 to 1945, but Portugal resumed colonial authority after the Japanese defeat in World War II. East Timor declared itself independent from Portugal on 28 November 1975 and was invaded and occupied by Indonesian forces nine days later. It was incorporated into Indonesia in July 1976 as the province of Timor Timur (East Timor). An unsuccessful campaign of pacification followed over the next two decades, during which an estimated 100,000 to 250,000 people died. In an August 1999 UN-supervised popular referendum, an overwhelming majority of the people of Timor-Leste voted for independence from Indonesia. However, in the next three weeks, anti-independence Timorese militias - organized and supported by the Indonesian military - commenced a large-scale, scorched-earth campaign of retribution. The militias killed approximately 1,400 Timorese and forced 300,000 people into western Timor as refugees. Most of the country's infrastructure, including homes, irrigation systems, water supply systems, and schools, and nearly all of the country's electrical grid were destroyed. On 20 September 1999, Australian-led peacekeeping troops deployed to the country and brought the violence to an end. On 20 May 2002, Timor-Leste was internationally recognized as an independent state. In 2006, internal tensions threatened the new nation's security when a military strike led to violence and a breakdown of law and order. At Dili's request, an Australian-led International Stabilization Force (ISF) deployed to Timor-Leste, and the UN Security Council established the UN Integrated Mission in Timor-Leste (UNMIT), which included an authorized police presence of over 1,600 personnel. The ISF and UNMIT restored stability, allowing for presidential and parliamentary elections in 2007 in a largely peaceful atmosphere. In February 2008, a rebel group staged an unsuccessful attack against the president and prime minister. The ringleader was killed in the attack, and most of the rebels surrendered in April 2008. Since the attack, the government has enjoyed one of its longest periods of post-independence stability, including successful 2012 elections for both the parliament and president and a successful transition of power in February 2015. In late 2012, the UN Security Council ended its peacekeeping mission in Timor-Leste and both the ISF and UNMIT departed the country.