Lawdar in Lawdar (Muḩāfaz̧at Abyan) is a place in Yemen about 151 mi (or 242 km) south-east of Sanaa, the country's capital city.

Current time in Lawdar is now 08:58 PM (Saturday). The local timezone is named Asia / Aden with an UTC offset of 3 hours. We know of 8 airports near Lawdar. The closest airport in Yemen is Beihan Airport in a distance of 63 mi (or 101 km), North. Besides the airports, there are other travel options available (check left side).

There is one Unesco world heritage site nearby. It's Old City of Sana'a in a distance of 151 mi (or 242 km), North-West.

While being here, you might want to pay a visit to some of the following locations: Al Wuday`, Mukayras, As Sawma`ah, Mudiyah and Al Bayda. To further explore this place, just scroll down and browse the available info. 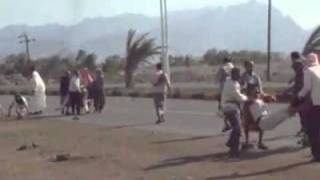 Lawdar is a town and seat of Lawdar District in south-western Yemen. It is located in the Abyan Governorate. It is served by Lawdar Airport.

Maghadih is a village in south-western Yemen. It is located in the Abyan Governorate.

Lawdar District is a district of the Abyan Governorate, Yemen. As of 2003, the district had a population of 88,155 inhabitants.

The First Battle of Lawdar refers to the Yemeni army offensive, launched between 19 and 25 August 2010 on the city of Lawdar, that at the time was controlled by Al-Qaeda in the Arabian Peninsula. Several activists including local leaders of Al Qaeda were killed during the clashes. On 25 August Yemeni authorities claimed to regain control.

These are some bigger and more relevant cities in the wider vivinity of Lawdar.