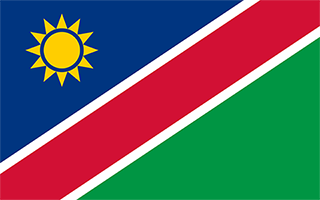 Safety Score: 2,8 of 5.0 based on data from 9 authorites. Meaning we advice caution when travelling to Namibia.

Namibia with its capital Windhoek is located in Africa (Southern Africa, bordering the South Atlantic Ocean). It covers some 824,293 square kilometers (slightly more than half the size of Alaska) with 2,484,780 citizens. English, Afrikaans, German and Herero are the languages commonly used by the people in Namibia (consider regional differences). Angola, Botswana, South Africa and Zambia are bordering countries.

Namibia is in Southern Africa, bordering South Africa, Botswana, Angola, Zambia and the Atlantic Ocean. Namibia is similar to South Africa, and if you're used to travelling in one country, travelling in the other country is quite easy. There are some subtle differences. For example, in South Africa a non-white person may choose to speak English rather than Afrikaans (as a political choice) whereas among Namibia's mixed-race population (who call themselves 'colored' in Namibia and South Africa) Afrikaans is a proud part of their culture, and many people still speak German.

The landscape is mostly high plateau with Namib Desert along coast as well as Kalahari Desert in east. The average density of population is about 3 per km². The climate in Namibia can be described as deserthot, dry, rainfall sparse and erratic. Potential threats by nature are prolonged periods of drought.

To reach someone Namibia dial +264 prior to a number. The local cellular networks are operated on 900 MHz, 1800 MHz, 3G, 4G. Websites typically end with the top level domain ".na". If you want to bring electric appliances (e.g. battery chaarger), keep in min the local 220 V - 50 Hz (plugs: D, M). The sign for the locally used currency Dollar is NAD.

A wide red stripe edged by narrow white stripes divides the flag diagonally from lower hoist corner to upper fly corner; the upper hoist-side triangle is blue and charged with a golden-yellow, 12-rayed sunburst; the lower fly-side triangle is green; red signifies the heroism of the people and their determination to build a future of equal opportunity for all; white stands for peace, unity, tranquility, and harmony; blue represents the Namibian sky and the Atlantic Ocean, the country's precious water resources and rain; the golden-yellow sun denotes power and existence; green symbolizes vegetation and agricultural resources.

South Africa occupied the German colony of South-West Africa during World War I and administered it as a mandate until after World War II, when it annexed the territory. In 1966, the Marxist South-West Africa People's Organization (SWAPO) guerrilla group launched a war of independence for the area that became Namibia, but it was not until 1988 that South Africa agreed to end its administration in accordance with a UN peace plan for the entire region. Namibia has been governed by SWAPO since the country won independence in 1990, though the party has dropped much of its Marxist ideology. Prime Minister Hage GEINGOB was elected president in 2014 in a landslide victory, replacing Hifikepunye POHAMBA who stepped down after serving two terms. SWAPO retained its parliamentary super majority in the 2014 elections and established a system of gender parity in parliamentary positions.