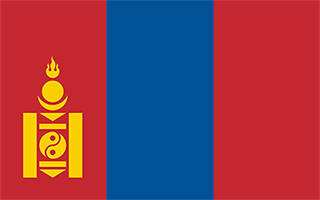 Safety Score: 3,0 of 5.0 based on data from 9 authorites. Meaning we advice caution when travelling to Mongolia.

Mongolia with its capital Ulan Bator is located in Asia (Northern Asia, between China and Russia). It covers some 1,564,121 square kilometers (slightly smaller than Alaska) with a population of 3,068,240. Mongolian and Russian are the languages spoken by people in Mongolia. Did you know that is sharing borders with China and Russia.

Mongolia is a landlocked country located between China and Russia. It is a vast emptiness that links land and sky, and is one of the last few places on the planet where nomadic life is still a living tradition. Mongolia is home to the three manly sports: wrestling, horse racing, and archery, and these are same three sporting events that take place every year at the Naadam festival. Local Bonda Lake Camp in Khatgal village near Lake Khovsgol offers various nature and cultural featuring: fishing, hiking, winter tours, nomad visits, horse back riding, visiting reindeer herders and Darhad valley.

The terrain is vast semidesert and desert plains, grassy steppe, mountains in west and southwest having Gobi Desert in south-central. The average density of population is about 2 per km². The climate in Mongolia can be described as desert with continental (large daily and seasonal temperature ranges). Possible natural disasters include "zud," which is harsh winter conditions, drought, dust storms and grassland and forest fires.

To reach someone Mongolia dial +976 prior to a number. The local cellular networks are operated on 900 MHz, 1800 MHz, 3G, 4G. Websites typically end with the top level domain ".mn". If you want to bring electric appliances (e.g. battery chaarger), keep in min the local 230 V - 50 Hz (plugs: C, E). The sign for the locally used currency Tugrik is MNT.

Three, equal vertical bands of red (hoist side), blue, and red; centered on the hoist-side red band in yellow is the national emblem ("soyombo" - a columnar arrangement of abstract and geometric representation for fire, sun, moon, earth, water, and the yin-yang symbol); blue represents the sky, red symbolizes progress and prosperity.

The Mongols gained fame in the 13th century when under Chinggis KHAAN they established a huge Eurasian empire through conquest. After his death the empire was divided into several powerful Mongol states, but these broke apart in the 14th century. The Mongols eventually retired to their original steppe homelands and in the late 17th century came under Chinese rule. Mongolia declared its independence from the Manchu-led Qing Empire in 1911 and achieved limited autonomy until 1919, when it again came under Chinese control. The Mongolian Revolution of 1921 ended Chinese dominance, and a communist regime, the Mongolian People’s Republic, took power in 1924. The modern country of Mongolia, however, represents only part of the Mongols' historical homeland; today, more ethnic Mongolians live in the Inner Mongolia Autonomous Region in the People's Republic of China than in Mongolia. Since the country's peaceful democratic revolution in 1990, the ex-communist Mongolian People's Revolutionary Party (MPRP) - which took the name Mongolian People’s Party (MPP) in 2010 - has competed for political power with the Democratic Party (DP) and several other smaller parties, including a new party formed by former President ENKHBAYAR, which confusingly adopted for itself the MPRP name. In the country's most recent parliamentary elections in June 2016, Mongolians handed the MPP overwhelming control of Parliament, largely pushing out the DP, which had overseen a sharp decline in Mongolia’s economy during its control of Parliament in the preceding years. President ELBEGDORJ, a DP member, will finish his second term as president in 2017, and is not eligible to run for re-election.