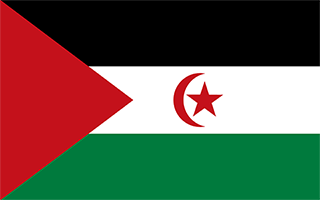 Western Sahara with its capital is located in Africa (Northern Africa, bordering the North Atlantic Ocean). It covers some 266,001 square kilometers (about the size of Colorado) with a population of 603,253. Arabic is the official language spoken by people in Western Sahara. Algeria, Mauritania and Morocco are bordering countries.

Western Sahara is an area in North Africa bordering the Atlantic Ocean, between Mauritania and Morocco. Western Sahara depends on pastoral nomadism, fishing, and phosphate mining as the principal sources of income for the population. Mostly low, flat desert, with large areas of rocky or sandy surfaces rising to small mountains in south and northeast. Low-lying sand dunes cover the territory.

The topography is mostly low, flat desert with large areas of rocky or sandy surfaces rising to small mountains in south and northeast. The average density of population is about 2 per km². The climate in Western Sahara can be described as hot, dry desertrain being rare, cold offshore air currents produce fog and heavy dew. Potential natural disasters are hot, dry, dust/sand-laden sirocco wind can occur during winter and spring widespread harmattan haze exists 60% of time, often severely restricting visibility

To reach someone Western Sahara dial +212 prior to a number. The local cellular networks are operated on 900 MHz, 3G. Websites typically end with the top level domain ".eh". If you want to bring electric appliances (e.g. battery chaarger), keep in min the local . The sign for the locally used currency Dirham is MAD.

Western Sahara is a disputed territory on the northwest coast of Africa bordered by Morocco, Mauritania, and Algeria. After Spain withdrew from its former colony of Spanish Sahara in 1976, Morocco annexed the northern two-thirds of Western Sahara and claimed the rest of the territory in 1979, following Mauritania's withdrawal. A guerrilla war with the Polisario Front contesting Morocco's sovereignty ended in a 1991 cease-fire and the establishment of a UN peacekeeping operation. As part of this effort, the UN sought to offer a choice to the peoples of Western Sahara between independence (favored by the Polisario Front) or integration into Morocco. A proposed referendum never took place due to lack of agreement on voter eligibility. The 2,700 km- (1,700 mi-) long defensive sand berm, built by the Moroccans from 1980 to 1987 and running the length of the territory, continues to separate the opposing forces with Morocco controlling the roughly 80 percent of the territory west of the berm. Local demonstrations criticizing the Moroccan authorities occur regularly, and there are periodic ethnic tensions between the native Sahrawi population and Moroccan immigrants. Morocco maintains a heavy security presence in the territory.