Saint Barthelemy with its capital Gustavia is located in North America (Caribbean, island between the Caribbean Sea and the North Atlantic Ocean; located in the Leeward Islands (northern) group; Saint Barthelemy lies east of the US Virgin Islands). It covers some 26 square kilometers (less than one-eighth the size of Washington, DC) with a population of 7,184. French is the official language spoken by people in Saint Barthelemy. Thiscountry has no land-based border with any other country. 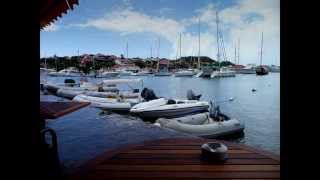 Saint-Barthélemy is a French island located in the Caribbean among the Leeward Islands. Its land area is 21.0 km² (8.1 sq. miles). Administratively, the whole island of Saint-Barthélemy is a French Overseas Collectivity, until recently part of Guadeloupe and is part of the European Union. The island is also known as St Barts, Saint Barths, or Saint Barth. The island has changed hands several times over the centuries, belonging to Sweden from the late 18th to late 19th century, after they swapped it for some warehouses with the French. Rent a small 4x4 Jeep but be careful!! Narrow, steep and windy roads! Fun to drive! Often a small car or jeep will be included in vacation package. Small island and everything is within a half hour drive. It is so beautiful, take your time and your camera!

The topography is hilly, almost completely surrounded by shallow-water reefs, with plentiful beaches. The average density of population is about 287 per km². The climate in Saint Barthelemy can be described as tropical, with practically no variation in temperature with has two seasons (dry and humid).

To reach someone Saint Barthelemy dial +590 prior to a number. The local cellular networks are operated on 900 MHz, 1800 MHz, 4G. Websites typically end with the top level domain ".gp". If you want to bring electric appliances (e.g. battery chaarger), keep in min the local 230 V - 60 Hz (plugs: C, E). The sign for the locally used currency Euro is EUR.

The flag of France is used.

Discovered in 1493 by Christopher COLUMBUS who named it for his brother Bartolomeo, Saint Barthelemy was first settled by the French in 1648. In 1784, the French sold the island to Sweden, which renamed the largest town Gustavia, after the Swedish King GUSTAV III, and made it a free port; the island prospered as a trade and supply center during the colonial wars of the 18th century. France repurchased the island in 1877 and took control the following year. It was placed under the administration of Guadeloupe. Saint Barthelemy retained its free port status along with various Swedish appellations such as Swedish street and town names, and the three-crown symbol on the coat of arms. In 2003 the islanders voted to secede from Guadeloupe, and in 2007 the island became a French overseas collectivity. In 2012, it became an overseas territory of the EU, allowing it to exert local control over the permanent and temporary immigration of foreign workers including non-French European citizens.