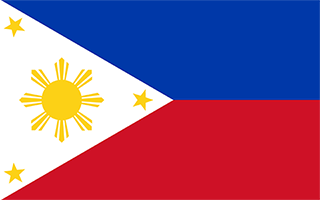 Safety Score: 3,2 of 5.0 based on data from 9 authorites. Meaning please reconsider your need to travel to Philippines.

Philippines with its capital Manila is located in Asia (Southeastern Asia, archipelago between the Philippine Sea and the South China Sea). It covers some 300,001 square kilometers (slightly less than twice the size of Georgia) with a population of 104,256,000. Tagalog and English are the languages spoken by people in Philippines. There are no land based border this country shares with any other country.

Philippines is an archipelago in South-East Asia. Combine all its beaches it forms one of the world's longest coastlines and it takes about 2 to 3 decades to visit and experience every island. Also, it may seem peculiar for tourists to notice the Latin flair in Filipino culture. Mainstream Philippine culture compared to the rest of Asia is quite Hispanic and westernized at the surface level. But still, Filipinos are essentially Austronesian and many indigenous and pre-Hispanic attitudes and ways of thinking are still noticeable underneath a seemingly westernized veneer. The climate is tropical, with March to May (summer) being the hottest months. The rainy season starts in June and extends through October with strong typhoons possible.

The terrain is mostly mountains with narrow to extensive coastal lowlands. The average density of population is about 348 per km². The climate in Philippines can be described as tropical marinenortheast monsoon (November to April), southwest monsoon (May to October). Possible natural disasters include active volcanoes, astride typhoon belt, usually affected by 15 and struck by five to six cyclonic storms each year, destructive earthquakes, landslides, significant volcanic activity; Taal (311 m), which has shown recent unrest and may erupt in the near future, has been deemed a Decade Volcano by the International Association of Volcanology and Chemistry of the Earth's Interior, worthy of study due to its and tsunamis.

To reach someone Philippines dial +63 prior to a number. The local cellular networks are operated on 900 MHz, 1800 MHz, 3G, 4G. Websites typically end with the top level domain ".ph". If you want to bring electric appliances (e.g. battery chaarger), keep in min the local 220 V - 60 Hz (plugs: A, B, C). The sign for the locally used currency Peso is PHP.

Two equal horizontal bands of blue (top) and red; a white equilateral triangle is based on the hoist side; the center of the triangle displays a yellow sun with eight primary rays; each corner of the triangle contains a small, yellow, five-pointed star; blue stands for peace and justice, red symbolizes courage, the white equal-sided triangle represents equality; the rays recall the first eight provinces that sought independence from Spain, while the stars represent the three major geographical divisions of the country: Luzon, Visayas, and Mindanao; the design of the flag dates to 1897.

The Philippine Islands became a Spanish colony during the 16th century; they were ceded to the US in 1898 following the Spanish-American War. In 1935 the Philippines became a self-governing commonwealth. Manuel QUEZON was elected president and was tasked with preparing the country for independence after a 10-year transition. In 1942 the islands fell under Japanese occupation during World War II, and US forces and Filipinos fought together during 1944-45 to regain control. On 4 July 1946 the Republic of the Philippines attained its independence. A 20-year rule by Ferdinand MARCOS ended in 1986, when a "people power" movement in Manila ("EDSA 1") forced him into exile and installed Corazon AQUINO as president. Her presidency was hampered by several coup attempts that prevented a return to full political stability and economic development. Fidel RAMOS was elected president in 1992. His administration was marked by increased stability and by progress on economic reforms. In 1992, the US closed its last military bases on the islands. Joseph ESTRADA was elected president in 1998. He was succeeded by his vice-president, Gloria MACAPAGAL-ARROYO, in January 2001 after ESTRADA's stormy impeachment trial on corruption charges broke down and another "people power" movement ("EDSA 2") demanded his resignation. MACAPAGAL-ARROYO was elected to a six-year term as president in May 2004. Her presidency was marred by several corruption allegations but the Philippine economy was one of the few to avoid contraction following the 2008 global financial crisis, expanding each year of her administration. Benigno AQUINO III was elected to a six-year term as president in May 2010 and was succeeded by Rodrigo DUTERTE in May 2016. The Philippine Government faces threats from several groups, some of which are on the US Government's Foreign Terrorist Organization list. Manila has waged a decades-long struggle against ethnic Moro insurgencies in the southern Philippines, which has led to a peace accord with the Moro National Liberation Front and ongoing peace talks with the Moro Islamic Liberation Front. The decades-long Maoist-inspired New People's Army insurgency also operates through much of the country. The Philippines faces increased tension with China over disputed territorial and maritime claims in the South China Sea.