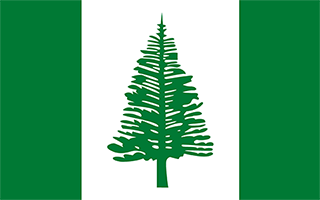 Norfolk Island with its capital Kingston is located in Oceania (Oceania, island in the South Pacific Ocean). It covers some 37 square kilometers (about 0.2 times the size of Washington, DC) with 1,748 citizens. English is the official language used in Norfolk Island. Thiscountry has no land-based border with any other country.

The topography is volcanic island with mostly rolling plains. The average density of population is about 49 per km². The climate in Norfolk Island can be described as subtropical with mild, little seasonal temperature variation. Potential natural disasters are tropical cyclones (especially May to July).

To reach someone Norfolk Island dial +672 prior to a number. The local cellular networks are operated on 900 MHz. Websites typically end with the top level domain ".nf". If you want to bring electric appliances (e.g. battery chaarger), keep in min the local 230 V - 50 Hz (plugs: I). The sign for the locally used currency Dollar is AUD.

Three vertical bands of green (hoist side), white, and green with a large green Norfolk Island pine tree centered in the slightly wider white band; green stands for the rich vegetation on the island, and the pine tree - endemic to the island - is a symbol of Norfolk Island.

Two British attempts at establishing the island as a penal colony (1788-1814 and 1825-55) were ultimately abandoned. In 1856, the island was resettled by Pitcairn Islanders, descendants of the Bounty mutineers and their Tahitian companions.