Nauru with its capital Yaren is located in Oceania (Oceania, island in the South Pacific Ocean). It covers some 22 square kilometers (about 0.1 times the size of Washington, DC) with 9,642 citizens. Nauru and English are the languages commonly used by the people in Nauru. This country shares no land borders with another country. 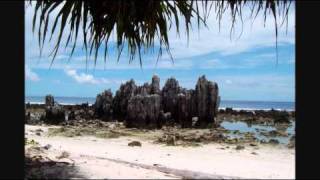 Nauru is a small island in the South Pacific Ocean, south of the Marshall Islands and is the world's smallest independent republic. The are a few sandy beaches but most of the shallow area around the island is coral reefs. Most of the interior of the island is worked-out mining land, which is to be rehabilitated. Swim in Anibore Harbour, which is the best bet for swimming, as most beaches are too shallow and rocky.

The landscape is sandy beach rises to fertile ring around raised coral reefs with phosphate plateau in center. The average density of population is about 459 per km². The climate in Nauru can be described as tropical with a monsoonal pattern with rainy season (November to February). Potential threats by nature are periodic droughts.

To reach someone Nauru dial +674 prior to a number. The local cellular networks are operated on 900 MHz, 1800 MHz, 3G. Websites typically end with the top level domain ".nr". If you want to bring electric appliances (e.g. battery chaarger), keep in min the local 240 V - 50 Hz (plugs: I). The sign for the locally used currency Dollar is AUD.

Blue with a narrow, horizontal, gold stripe across the center and a large white 12-pointed star below the stripe on the hoist side; blue stands for the Pacific Ocean, the star indicates the country's location in relation to the Equator (the gold stripe) and the 12 points symbolize the 12 original tribes of Nauru; the white star color represents phosphate, the basis of the island's wealth.

The exact origins of the Nauruans are unclear since their language does not resemble any other in the Pacific region. Germany annexed the island in 1888. A German-British consortium began mining the island's phosphate deposits early in the 20th century. Australian forces occupied Nauru in World War I; it subsequently became a League of Nations mandate. After the Second World War - and a brutal occupation by Japan - Nauru became a UN trust territory. It achieved independence in 1968 and joined the UN in 1999 as the world's smallest independent republic.