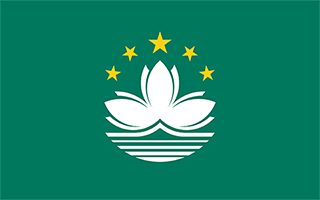 Safety Score: 3,0 of 5.0 based on data from 9 authorites. Meaning we advice caution when travelling to Macao.

Macao with its capital Macau is located in Asia (Eastern Asia, bordering the South China Sea and China). It covers some 29 square kilometers (less than one-sixth the size of Washington, DC) with a population of 601,969. Chinese, Chinese and Portuguese are some of the languages spoken by the majority in Macao (consider regional differences). There are no land based border this country shares with any other country.

Macao is a Special Administrative Region (SAR) of China. Located across the Pearl River estuary from Hong Kong, until 1999 Macau was an overseas territory of Portugal. Besides the city itself, Macau includes the islands of Taipa and Coloane, which are connected to Macau by bridges and to each other by a causeway, now built up into the Cotai Strip. Although best known for gambling, Macau is extremely rich in attractions and oozing with atmosphere, thanks to hundreds of years of fusion between European and Chinese cultures. Macau is a fascinating place to just walk around as the place is packed with churches, temples, fortresses and other old buildings bearing an interesting mix of Portuguese and Chinese characteristics.

The terrain is generally flat. The average density of population is about 21,346 per km². The climate in Macao can be described as subtropical with marine with cool winters, warm summers. Possible natural disasters include typhoons.

To reach someone Macao dial +853 prior to a number. The local cellular networks are operated on 900 MHz, 1800 MHz, 3G, 4G. Websites typically end with the top level domain ".mo". If you want to bring electric appliances (e.g. battery chaarger), keep in min the local . The sign for the locally used currency Pataca is MOP.

Green with a lotus flower above a stylized bridge and water in white, beneath an arc of five gold, five-pointed stars: one large in the center of the arc and two smaller on either side; the lotus is the floral emblem of Macau, the three petals represent the peninsula and two islands that make up Macau; the five stars echo those on the flag of China.

Colonized by the Portuguese in the 16th century, Macau was the first European settlement in the Far East. Pursuant to an agreement signed by China and Portugal on 13 April 1987, Macau became the Macau Special Administrative Region of the People's Republic of China on 20 December 1999. In this agreement, China promised that, under its "one country, two systems" formula, China's political and economic system would not be imposed on Macau, and that Macau would enjoy a "high degree of autonomy" in all matters except foreign affairs and defense for the subsequent 50 years.