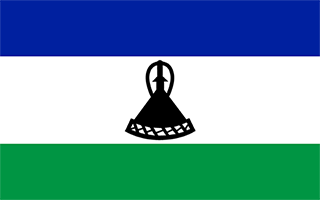 Safety Score: 3,0 of 5.0 based on data from 9 authorites. Meaning we advice caution when travelling to Lesotho.

Lesotho with its capital Maseru is located in Africa (Southern Africa, an enclave of South Africa). It covers some 30,356 square kilometers (slightly smaller than Maryland) with 1,958,040 citizens. English, Southern Sotho, Zulu and Xhosa are the common languages used in Lesotho (consider regional differences). As an interesting fact, South Africa is the only bordering country.

Lesothois a country in Southern Africa. Known as the Kingdom in the Sky because of its lofty altitude — it has the highest lowest point of any country in the world (1400m) and is the only country to be entirely above 1000m!Lesotho has 300 days of sunshine. The rainy season extends from October to April in which Lesotho gets 70mm of rainfall, mostly during severe thunderstorms. Do: Skiing, Hiking, Pony-Trekking...

The topography is mostly highland with plateaus, hills, and mountains. The average density of population is about 65 per km². The climate in Lesotho can be described as temperatecool to cold, dry winters, hot, wet summers. Potential natural disasters are periodic droughts.

To reach someone Lesotho dial +266 prior to a number. The local cellular networks are operated on 900 MHz, 3G, 4G. Websites typically end with the top level domain ".ls". If you want to bring electric appliances (e.g. battery chaarger), keep in min the local 220 V - 50 Hz (plugs: M). The sign for the locally used currency Loti is LSL.

Three horizontal stripes of blue (top), white, and green in the proportions of 3:4:3; the colors represent rain, peace, and prosperity respectively; centered in the white stripe is a black Basotho hat representing the indigenous people; the flag was unfurled in October 2006 to celebrate 40 years of independence.

Basutoland was renamed the Kingdom of Lesotho upon independence from the UK in 1966. The Basutho National Party ruled the country during its first two decades. King MOSHOESHOE was exiled in 1990, but returned to Lesotho in 1992 and was reinstated in 1995 and subsequently succeeded by his son, King LETSIE III, in 1996. Constitutional government was restored in 1993 after seven years of military rule. In 1998, violent protests and a military mutiny following a contentious election prompted a brief but bloody intervention by South African and Batswana military forces under the aegis of the Southern African Development Community. Subsequent constitutional reforms restored relative political stability. Peaceful parliamentary elections were held in 2002, but the National Assembly elections in 2007 were hotly contested and aggrieved parties disputed how the electoral law was applied to award proportional seats in the Assembly. In 2012, competitive elections involving 18 parties saw Prime Minister Motsoahae Thomas THABANE form a coalition government - the first in the country's history - that ousted the 14-year incumbent, Pakalitha MOSISILI, who peacefully transferred power the following month. MOSISILI returned to power in snap elections in February 2015 after the collapse of THABANE’s coalition government and an alleged attempted military coup.