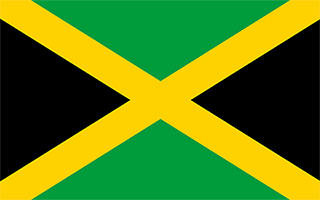 Safety Score: 3,8 of 5.0 based on data from 9 authorites. Meaning please reconsider your need to travel to Jamaica.

Jamaica with its capital Kingston is located in North America (Caribbean, island in the Caribbean Sea). It covers some 10,992 square kilometers (about half the size of New Jersey) with 2,990,560 citizens. English is the language commonly spoken used in Jamaica. This country shares no land borders with another country.

Jamaica is an island nation in the Caribbean, located to the south of Cuba and to the west of the island of Hispaniola. The climate in Jamaica is tropical, with hot and humid weather, although higher inland regions are more temperate. Some regions on the south coast are relatively dry rain-shadow areas. Jamaica lies in the hurricane belt of the Atlantic Ocean; as a result, the island sometimes experiences significant storm damage. Visit Nine Mile where Bob Marley was born and now buried. The journey up into the mountains lets you experience the heart of the country.

The landscape is mostly mountains, with narrow, discontinuous coastal plain. The average density of population is about 272 per km². The climate in Jamaica can be described as tropicalhot, humid, temperate interior. Potential threats by nature are hurricanes (especially July to November).

Diagonal yellow cross divides the flag into four triangles - green (top and bottom) and black (hoist side and fly side); green represents hope, vegetation, and agriculture, black reflects hardships overcome and to be faced, and yellow recalls golden sunshine and the island's natural resources.

The island - discovered by Christopher COLUMBUS in 1494 - was settled by the Spanish early in the 16th century. The native Taino, who had inhabited Jamaica for centuries, were gradually exterminated and replaced by African slaves. England seized the island in 1655 and established a plantation economy based on sugar, cocoa, and coffee. The abolition of slavery in 1834 freed a quarter million slaves, many of whom became small farmers. Jamaica gradually increased its independence from Britain. In 1958 it joined other British Caribbean colonies in forming the Federation of the West Indies. Jamaica gained full independence when it withdrew from the Federation in 1962. Deteriorating economic conditions during the 1970s led to recurrent violence as rival gangs affiliated with the major political parties evolved into powerful organized crime networks involved in international drug smuggling and money laundering. Violent crime, drug trafficking, and poverty pose significant challenges to the government today. Nonetheless, many rural and resort areas remain relatively safe and contribute substantially to the economy.