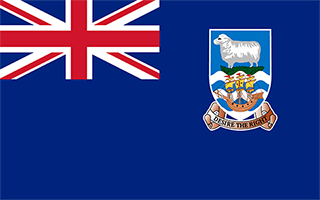 Falkland Islands with its capital Stanley is located in South America (Southern South America, islands in the South Atlantic Ocean). It covers some 12,174 square kilometers (slightly smaller than Connecticut) with 3,198 citizens. English is the language commonly spoken used in Falkland Islands. This country shares no land borders with another country. 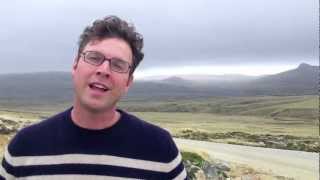 The Falkland Islands consist of two main islands and several hundred smaller islands in the south Atlantic Ocean, off the east coast of southern South America. They are a United Kingdom Overseas Territory, but nearby Argentina claims jurisdiction under the name Islas Malvinas. The most popular reason to visit is for the scenic beauty and the flora and fauna. Conservation is high on the Islands' agenda. Bird and marine species are the most prevalent fauna and include five species of penguin, four species of seal, albatross, petrels, the Falkland Flightless Steamer duck (Logger Duck), other duck species, geese, hawks and falcons. The Striated Caracara (Johnny Rook) is a rare bird of prey found only on the Falkland Islands and some islands off Cape Horn. Porpoises and dolphins are often sighted with the occasional sighting of whales.

The landscape is rocky, hilly, mountainous with some boggy, undulating plains. The average density of population is about 0 per km². The climate in Falkland Islands can be described as cold marinestrong westerly winds, cloudy, humid, rain occurs on more than half of days in year, average annual rainfall being 60 cm in Stanley, occasional snow all year, except in January and February, but typically does not accumulate. Potential threats by nature are strong winds persist throughout the year.

To reach someone Falkland Islands dial +500 prior to a number. The local cellular networks are operated on 900 MHz. Websites typically end with the top level domain ".fk". If you want to bring electric appliances (e.g. battery chaarger), keep in min the local 240 V - 50 Hz (plugs: G). The sign for the locally used currency Pound is FKP.

Blue with the flag of the UK in the upper hoist-side quadrant and the Falkland Island coat of arms centered on the outer half of the flag; the coat of arms contains a white ram (sheep raising was once the major economic activity) above the sailing ship Desire (whose crew discovered the islands) with a scroll at the bottom bearing the motto DESIRE THE RIGHT.

Although first sighted by an English navigator in 1592, the first landing (English) did not occur until almost a century later in 1690, and the first settlement (French) was not established until 1764. The colony was turned over to Spain two years later and the islands have since been the subject of a territorial dispute, first between Britain and Spain, then between Britain and Argentina. The UK asserted its claim to the islands by establishing a naval garrison there in 1833. Argentina invaded the islands on 2 April 1982. The British responded with an expeditionary force that landed seven weeks later and after fierce fighting forced an Argentine surrender on 14 June 1982. With hostilities ended and Argentine forces withdrawn, UK administration resumed. In response to renewed calls from Argentina for Britain to relinquish control of the islands, a referendum was held in March 2013, which resulted in 99.8% of the population voting to remain a part of the UK.