Safety Score: 2,7 of 5.0 based on data from 9 authorites. Meaning we advice caution when travelling to Equatorial Guinea.

San Antonio de Palé in Annobón Province with it's 4,433 citizens is a place in Equatorial Guinea about 417 mi (or 672 km) south-west of Malabo, the country's capital city.

Current time in San Antonio de Palé is now 01:56 PM (Tuesday). The local timezone is named Africa / Malabo with an UTC offset of one hour. We know of 1 airports near San Antonio de Palé. The closest is airport we know is São Tomé International Airport in Sao tome and principe in a distance of 144 mi (or 232 km). Besides the airports, there are other travel options available (check left side).

While being here, you might want to pay a visit to some of the following locations: Sao Joao dos Angolares, Sao Tome, Port-Gentil, Santo Antonio and Libreville. To further explore this place, just scroll down and browse the available info. 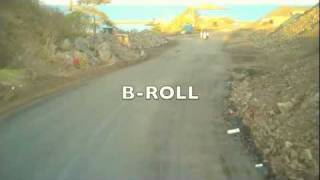 Footage taken by Pablo Manriquez on Annobon Island standing in the bed of a fast-moving pickup truck.

San Antonio de Palé, is the capital of Annobón, an island in Equatorial Guinea that was once part of the Spanish Empire in Africa. A small town, it has only 600 inhabitants, the majority of whom speak the Annobonese creole. It is located in the extreme north of the island, which is the driest and flattest area. It is home to an aerodrome, a quay, a medical centre, a school, a lighthouse, a radio station and a Catholic mission.

Palea is a city in Equatorial Guinea. It is located in Annobón Province and has a (2005 est. ) population of 4433.

Quioveo is the extinct volcanic peak at the centre of the island of Annobón, Equatorial Guinea. It rises to a height of 598 metres.

These are some bigger and more relevant cities in the wider vivinity of San Antonio de Palé.

These are the most popular locations in Equatorial Guinea on Tripmondo.