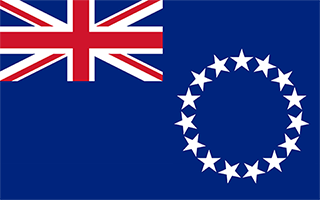 Safety Score: 5,0 of 5.0 based on data from 9 authorites. Meaning it is not safe to travel Cook Islands.

Cook Islands with its capital Avarua is located in Oceania (Oceania, group of islands in the South Pacific Ocean). It covers some 237 square kilometers (1.3 times the size of Washington, DC) with a population of 9,290. English and Maori are the languages spoken by people in Cook Islands. Thiscountry has no land-based border with any other country.

The Cook Islands are a self-governing parliamentary democracy in free association with New Zealand, located in Polynesia, in the middle of the South Pacific Ocean, named after Captain Cook, who sighted them in 1770. The population of the Cook Islands is less than 15,000 but there are over 50,000 Cook Islanders living in New Zealand, and over 30,000 in Australia. Though the locals often go barefoot, it's not recommended beyond sandy beaches due to the sharp coral rocks. Most of the outer islands turn off the entire electric system (blackout) overnight. Bring a flashlight (torch) with batteries. There are five living languages in the Cook Islands with English and Cook Islands Maori the official languages. Cook Islands Maori is called Rarotongan after the capital island and is the most widely spoken version of Maori in the Islands. The Cook Islands use the New Zealand Dollar, but also issue their own banknotes and coinage, including the unusual $3 notes and the triangular $2 coins. Cook Islands money is only negotiable within the Cook Islands. Overall, much cheaper than nearby Tahiti, though anything imported will be expensive. This especially applies to fuel and to milk. Try the islands' ika mata (raw tuna) with coconut milk, finely chopped vegetables.

The topography is low coral atolls in north with volcanic, hilly islands in south. The average density of population is about 39 per km². The climate in Cook Islands can be described as tropical oceanicmoderated by trade winds, a dry season from April to November and a more humid season from December to March. Potential natural disasters are tropical cyclones (November to March).

To reach someone Cook Islands dial +682 prior to a number. The local cellular networks are operated on 900 MHz, 3G, 4G. Websites typically end with the top level domain ".ck". If you want to bring electric appliances (e.g. battery chaarger), keep in min the local 240 V - 50 Hz (plugs: I). The sign for the locally used currency Dollar is NZD.

Blue with the flag of the UK in the upper hoist-side quadrant and a large circle of 15 white five-pointed stars (one for every island) centered in the outer half of the flag.

Named after Captain COOK, who sighted them in 1770, the islands became a British protectorate in 1888. By 1900, administrative control was transferred to New Zealand; in 1965, residents chose self-government in free association with New Zealand. The emigration of skilled workers to New Zealand, government deficits, and limited natural resources are of continuing concern.