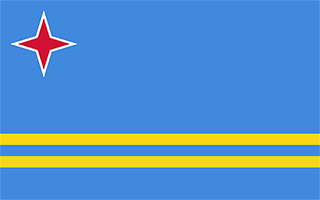 Safety Score: 4,0 of 5.0 based on data from 9 authorites. Meaning please reconsider your need to travel to Aruba.

Aruba with its capital Oranjestad is located in North America (Caribbean, island in the Caribbean Sea). It covers some 181 square kilometers (slightly larger than Washington, DC) with 115,120 citizens. Dutch, Spanish and English are the common languages used in Aruba (consider regional differences). Thiscountry has no land-based border with any other country.

Aruba is a Caribbean island 15 miles north of the coast of Venezuela. The island is an autonomous dependency of the Kingdom of the Netherlands. This flat, riverless island is renowned for its white sand beaches. Its tropical climate is moderated by constant trade winds from the Atlantic Ocean. The temperature is almost constant at about 27°C (81°F). The southwest has the white sand beaches, turquoise seas, and warm waters. The northeast coast, exposed to the Atlantic, has a few white sand beaches, rough seas with treacherous currents, and a rocky coastline. The running water in Aruba is absolutely safe to drink; the island's desalination plant is the second largest in the world. Aruba is generally a very safe place at any time of day or night.

The topography is flat with a few hills with scant vegetation. The average density of population is about 640 per km². The climate in Aruba can be described as tropical marine with little seasonal temperature variation. Potential natural disasters are hurricanes lies outside the Caribbean hurricane belt and is rarely threatened

Blue, with two narrow, horizontal, yellow stripes across the lower portion and a red, four-pointed star outlined in white in the upper hoist-side corner; the star represents Aruba and its red soil and white beaches, its four points the four major languages (Papiamento, Dutch, Spanish, English) as well as the four points of a compass, to indicate that its inhabitants come from all over the world; the blue symbolizes Caribbean waters and skies; the stripes represent the island's two main "industries": the flow of tourists to the sun-drenched beaches and the flow of minerals from the earth.

Discovered and claimed for Spain in 1499, Aruba was acquired by the Dutch in 1636. The island's economy has been dominated by three main industries. A 19th century gold rush was followed by prosperity brought on by the opening in 1924 of an oil refinery. The last decades of the 20th century saw a boom in the tourism industry. Aruba seceded from the Netherlands Antilles in 1986 and became a separate, autonomous member of the Kingdom of the Netherlands. Movement toward full independence was halted at Aruba's request in 1990.